Have you ever wondered about the difference between a food chain and a food web? While a food chain follows a singular link, a food web shows how diverse and interconnected an ecosystem's food sources can be. Explore what a food web is in science through a food web diagram. You'll also get vocabulary words and a fun coloring printable to expand your food web thinking. 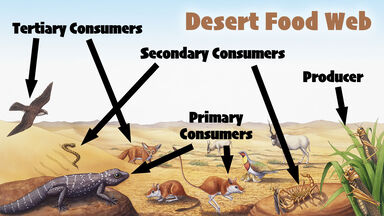 What Is a Food Web in Science?

Do you like to eat just one food? Well, animals don't either. They like to eat all different types of plants and animals, depending on whether they are a herbivore, omnivore or carnivore.

For example, a red fox likes to eat rabbits and birds. A thrush, which is a type of bird, like to eat both worms and snails. To illustrate the different foods animals like, a food web shows several of the different food chains in a habitat and how they work together. To really understand a food web, you need to look at a food chain first.

A food chain shows you how one organism eats another and transfers its energy. For example, a zebra eats grass, and the zebra is eaten by the lion. The food chain looks like this:

Food chains are a simple look at how sunlight is made into energy by plants through photosynthesis, then how that energy is transferred from animal to animal after eating the plants.

Food webs look at how multiple food chains interact with each other. Since most animals or plants might be part of several different food chains, they can create a food web that is made up of lots of producers, consumers and decomposers.

To see how a food web works, it can be easiest to look at an example.

See how it can get confusing? Looking at a food web diagram can really clear things up.

Each level in a food web is a trophic level. This means that energy is transferred from one organism to another, or from one trophic level to another. At the beginning of the food web are the producers or autotrophs. The producers are then eaten by the consumers or heterotrophs, which include primary, secondary, and tertiary consumers, plus the decomposers.

Food webs exist in a variety of biomes. Because each habitat is unique, each food web is slightly different. Explore different plants, animals and decomposers that can be found in deserts, savannas, forests and marine environments.

A desert is a habitat with little water. Deserts aren't all hot either. Some deserts are very cold. In the desert food web, you'll find:

In a food web, cacti are eaten by insects, lizards or rodents. The insects can be eaten by the tarantulas, scorpions and lizards. The lizards are then hunted by snakes, foxes and hawks. Everyone likes a little variety in their diet.

Forests have lots of trees and other plants. They are dense with lots of different vegetation for animals to enjoy. Check out the different players in a desert food web.

A savanna biome has a lot of grass for animals to graze on. These habitats are found in Africa, Australia and even South America. You might see zoo animals like zebras and lions. Find out who will be in a savanna food web.

Underwater creatures like variety too. In a marine environment, examples that you will find in the food web include:

If you were to watch the food web happen underwater, you would see krill eat plankton. The krill would then be eaten by fish or a whale. That fish might be eaten by a seagull or a seal.

Try your hand at understanding a food web through a fun coloring page. Simply print and color.

Food webs have many different moving parts that are all important to maintaining a stable ecosystem. Explore these vocabulary words to further your knowledge of food webs.

When it comes to energy, everyone has to eat. Since animals like variety, you'll find that food sources don't just happen in a single chain. Even the top consumers become food for something in the end! Learn more about decomposers by exploring examples of zygomycetes.