Verisimilitude is a big word with a simple definition. If you’ve ever connected with a work of fiction because it felt real in some ways, you’ve been influenced by verisimilitude. Learn more about this important literary device through examples and explanations. 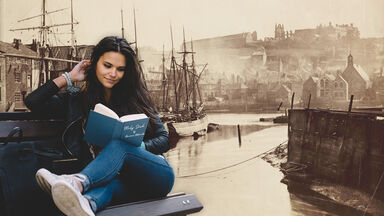 Verisimilitude (v-air-eh-sim-ill-ih-tood) is a noun defined as “appearing, or having the appearance of, being real or true.” The term comes from the Latin word verisimilitudo, which means “probably.”

In literature, verisimilitude portrays everything from setting and characters to dialogue and plot in ways that feel authentic and true even though they are made up.

Role of Verisimilitude in Literature

Expert writers consider verisimilitude an essential literary device used in fiction. This semblance of truth in specific elements or the whole story helps readers connect to the work because they are able to believe it could be real.

Examples of Verisimilitude in Literature

You can find examples of verisimilitude in children’s books and adult books from all fiction genres. You wouldn’t typically call the realism in nonfiction works verisimilitude because nonfiction is actually real rather than appearing real.

Hogwarts School of Witchcraft and Wizardry

Moby Dick by Herman Melville is a work of fiction about a man and his battle with a whale. Melville uses real whaling terms and descriptions throughout the book after being inspired by a real-life incident where a whale seemingly attacked a ship. This high degree of cultural verisimilitude rings true to readers.

The Outlander Series by Diana Gabaldon

You might not believe time travel is possible, but author Diana Gabaladon’s use of verisimilitude in her Outlander series makes readers believe Claire and Jamie could be real people. Her depictions of realistic life in Scotland in the 1700s along with the use of the Gaelic language have great cultural verisimilitude.

The Appeal of Verisimilitude

Even if verisimilitude is a new vocabulary word for you, you’ve probably noticed it in the fiction books you’ve read. If you like this feeling of truth in fiction, you might also like to explore the use of things like anachronism.