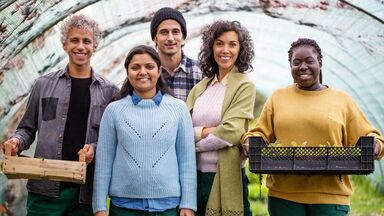 Besides the individual, the family is the smallest unit in the field of sociology. It determines kinship, which is a family member's blood or marriage relationship to another family member. Additionally, the family institution serves as a child's first exposure to society. They will use the lessons and skills learned within the family in the larger community.

Examples of the secondary institutions of the family include:

Most, if not all, families fall into one or more of these secondary institutions. They create a sense of identity and connection for individuals and pass societal culture between generations.

Examples of secondary economic institutions are:

While not every individual participates in religious organizations, the institution of religion is present in every human society. Explore examples of secondary institutions of religion.

Societies may include more than one religious institution, but the purpose of this social institution is the same no matter what religion it is. Religion reinforces the norms and values of a society, and its members generally contribute positively to that society.

Government, or the state, is another major social institution. Every society has a ruling class of some kind that makes decisions for citizens of the states.

Secondary institutions of the state include:

How each state functions depends on the type of government it has. In many modern societies, the government institution controls much of what happens in its citizens' daily lives, while other governments allow their citizens to exercise civil rights and liberties.

A community is a group of people in the same area and under the same government. They can be defined according to their location and type of settlement.

Examples of communities are:

You'll find a number of extensive communities that are not defined by their location, but by the common attitudes or interests of their participants.

Within communities are organizations to help with social issues. These community service organizations are often funded by local governments to serve the greater good.

Ethnic or cultural groups are social institutions that include a group of extended family groups related by a distant, common ancestry. Members of ethnic groups do not need to be related to be connected in the shared experiences of their social institutions.

While some governments include healthcare as a secondary institution, other states prefer to keep these social institutions private.

Examples of organizations within the healthcare institution include:

The legal system is another institution that is typically run by the government. However, there are some societies that separate these institutions.

Parts of the justice system include:

Mass media shapes communication and opinions. It is present in most modern societies, but other human groups are not exposed to the same level of media saturation.

Elements of the institution of media include:

Institutions that ensure social welfare include worldwide nonprofit organizations and charities. They are similar to community service institutions but aren't limited to one community at a time.

Living and Thriving in a Society

Social institutions exist to help individuals live their best lives in society. They are the building blocks of any functioning society of humans. Learn more about the examples of social norms that are upheld by social institutions. If you're interested in the problems that arise in today's global society, check out these examples of social justice issues facing the world.