Sonnet Examples: 4 Types and Their Characteristics

Many people study Shakespeare and sonnets in school, but did you know that there are other types of sonnets — or that Shakespeare didn’t invent this style of poetry? Sonnet examples help illustrate the beauty of this poetry. Discover different types with these sonnet poem examples, including Shakespearean sonnets. 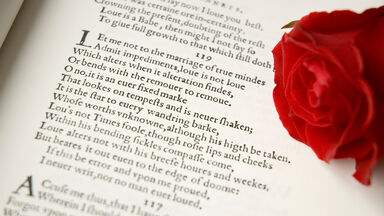 A sonnet with a red rose as sonnet examples
Advertisement

What Is a Sonnet?

A sonnet is a form of lyrical poetry that originated in Italy in the 13th century. In fact, sonnet is derived from the Italian word sonetto, meaning "little sound" or "little song." You can spot a sonnet by its 14-line arrangement.

There are four types of sonnets:

Italian and English sonnets are the most common forms, and Miltonic and Spenserian sonnets evolved from them.

The first and most common type of sonnet is the Italian sonnet, otherwise known as the Petrarchan sonnet. Giacomo da Lentini is attributed as the inventor of this form of poetry, even though it's named after Francesco Petrarca, one of the most revered Italian poets. Other notable sonneteers from Italy include Dante Alighieri, Guido Cavalcanti and Michelangelo.

While Italian sonnets generally follow iambic pentameter, the meter for the sestet tends to be more flexible. Meaning, either the first (iamb) or the second (troche) syllable may be stressed in the two-syllable metric "foot."

These sonnets are divided into two stanzas. The first stanza contains eight lines, known as an octave; the second stanza contains six lines, or a sestet. In an Italian sonnet, there is a "volta" or "turn," which signals a change from the proposition of the poem to its resolution. The volta usually appears in the ninth line.

Initially, the rhyme scheme for the octave was ABABABAB. Eventually, it evolved into ABBAABBA. The sestet is either CDECDE or CDCCDC. Later, the variation of CDCDCD was introduced.

A great example of an Italian sonnet is "Sonnet 26" by the creator of the form, Giacomo da Lentini.

"I’ve seen it rain on sunny days
And seen the darkness flash with light
And even lightning turn to haze,
Yes, frozen snow turn warm and bright
And sweet things taste of bitterness
And what is bitter taste most sweet
And enemies their love confess
And good, close friends no longer meet.

Yet stranger things I’ve seen of love
Who healed my wounds by wounding me.
The fire in me he quenched before;
The life he gave was the end thereof,
The fire that slew eluded me.
Once saved from love, love now burns more."

The second most common form of the sonnet is the English sonnet, otherwise known as the Shakespearean or Elizabethan sonnet. These sonnets are divided into four stanzas, comprising 14 lines in total.

Published in 1591, the sonnet set "Astrophil and Stella" by Sir Philip Sidney established the form of the English sonnet. Other notable authors include Michael Drayton, Fulke Greville, and, of course, William Shakespeare. Even though Shakespeare did not invent this sonnet style, he was among the most prolific, writing 154 in his lifetime.

"Astrophil and Stella 1," the first of 108 sonnets and songs in Philip Sidney's set, creates the opening scene for this love story.

"Loving in truth, and fain in verse my love to show,
That she, dear she, might take some pleasure of my pain,—
Pleasure might cause her read, reading might make her know,
Knowledge might pity win, and pity grace obtain,—
I sought fit words to paint the blackest face of woe;
Studying inventions fine her wits to entertain,
Oft turning others' leaves, to see if thence would flow
Some fresh and fruitful showers upon my sunburn'd brain.
But words came halting forth, wanting invention's stay;
Invention, Nature's child, fled step-dame Study's blows;
And others' feet still seem'd but strangers in my way.
Thus great with child to speak and helpless in my throes,
Biting my truant pen, beating myself for spite,
'Fool,' said my Muse to me, 'look in thy heart, and write.'"

English poet John Milton went on to make a few refinements to the Italian sonnet. His variations became known as Miltonic sonnets. The context of his poems was different in that they took on an air of self-reflection and interior thinking. Beyond that, his form also varied; he would allow the octave to morph into a sestet wherever needed.

"When I Consider How My Light Is Spent" is an example of one of John Milton's better-known sonnets.

"When I consider how my light is spent,
Ere half my days in this dark world and wide,
And that one talent which is death to hide
Lodged with me useless, though my soul more bent
To serve therewith my Maker, and present
My true account, lest He returning chide;
'Doth God exact day-labor, light denied?'
I fondly ask. But Patience, to prevent
That murmur, soon replies, 'God doth not need
Either man's work or His own gifts. Who best
Bear His mild yoke, they serve Him best. His state
Is kingly: thousands at His bidding speed,
And post o'er land and ocean without rest;
They also serve who only stand and wait.'"

Sixteenth-century English poet Sir Edmund Spenser did his best to make some refinements to the English sonnet. While his work also contained three quatrains and a couplet, he would also bridge quatrains together by rhyming the last line of one quatrain with the first line of the next. This, in effect, created a rhyming couplet between the quatrains. The resulting rhyme scheme became ABAB BCBC CDCD EE.

In a way, the Spenserian sonnet reorganized English sonnets into couplets, giving a nod to the Italian sonnet. It is suspected Spenser did this to remove the pressure one felt to bring the poem to a conclusion or resolution in the final couplet.

Sir Edmund Spenser's "Sonnet LXV" is a fine example of his take on a sonnet.

"One day I wrote her name upon the strand,
But came the waves and washed it away:
Again I wrote it with a second hand,
But came the tide and made my pains his prey.
'Vain man,' said she, 'that dost in vain assay
A mortal thing so to immortalize,
For I myself shall like to this decay,
And eke my name be wiped out likewise.'
'Not so,' (quod I) 'Let baser things devise
To die in dust, but you shall live by fame:
My verse your virtues rare shall eternize
And in the heavens write your glorious name:
Where, when as death shall all the world subdue,
Our love shall live, and later life renew.'"

With all this inspiration seeping into your mind, why not try your hand at writing a sonnet of your own? You can write about any topic you want!

Consider these tips to help you get started:

Try Your Hand at Poetry

Browse through our tips on poetry writing and who knows? You might just create poetry that will last through the ages, like the greats who came before you.