If you've ever accidentally mixed up the sounds of letters or syllables from one word to another when trying to utter a phrase, you've committed a spoonerism. Technically linguistic errors, spoonerisms occur quite frequently in everyday conversation. Discover a selection of interesting and entertaining spoonerism examples. 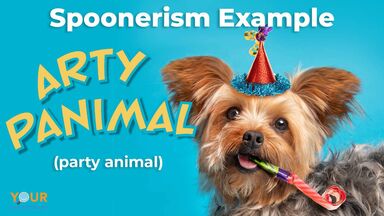 The Origin of Spoonerisms

Spoonerisms are named after a British professor who is believed to have had a tendency to mix up his words — or wix up his mords. The Reverend Archibald Spooner (1844-1939) was an esteemed English language scholar who served for more than 20 years in a leadership role at Oxford's New College.

While some say that Spooner frequently transposed segments of words, others claim that he actually did this only once, publicly uttering "kinkering kongs” instead of "conquering kings" while speaking at a worship service. Whichever version is true, or if the truth lies somewhere between the two extremes, the term spoonerism has long been used to describe this particular type of linguistic mistake.

While people sometimes utter spoonerisms on purpose, they quite often occur accidentally, as a slip of the tongue.

Some spoonerisms include only two words.

Some spoonerisms are longer phrases, with three or more words.

Authors sometimes intentionally use spoonerisms as a literary device to introduce humor into their work. The names of authors or characters in works of literature are sometimes accidentally (or on purpose) expressed as spoonerisms.

If you're entertained by spoonerisms, don't stop there. Explore some other linguistic mistakes that add a bit of fun to spoken language. Start by exploring some eggcorn examples. From there, expand your insight into similar errors by discovering some examples of malapropisms. Not only will you learn about language and literary devices, but you'll also enjoy a few laughs along the way.