Being knowledgeable about civics requires having a basic understanding of how state and local governments work within the United States. Learn about key governmental powers and responsibilities at the state and local levels. 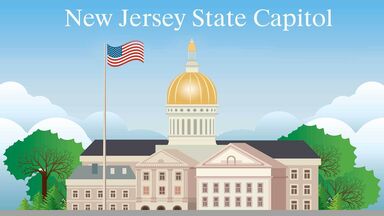 In the United States, the government of each state follows the same three-branch format as the federal government. This means that state governments have executive, legislative and judicial branches. Each state must operate within the boundaries of its constitution.

Not every state has all of these roles. Some have other roles. In some states, roles other than governor can be elected or appointed. States also have a number of agencies and departments dedicated to things like education, highway construction and maintenance, economic development, services for citizens with disabilities, and more.

Each state has a legislature, with representatives elected by the citizens to serve terms that vary from two to four years. Except for Nebraska, all of the state legislatures have two divisions: an upper chamber and a lower chamber. Each upper chamber is called the Senate. The lower chambers don't all have the same name in each state. Common names include State Assembly, House of Representatives and House of Delegates. (Nebraska's legislature has only one chamber.)

The judicial branch of state governments is focused on justice. It is headed up by the State Supreme Court and includes lower state-level courts. The manner in which a state's judicial system is structured is defined either through the state's constitution or the legislative process.

Municipal level governments include cities, counties, towns, and townships. Some municipal governments are very small while others (like Atlanta and Seattle) are very large. The municipal government usually oversees necessary services to people who live within municipal boundaries. Most municipalities are led by elected officials, including a mayor and city or town council. Examples of common powers and responsibilities include:

Most states are divided into counties, though Louisiana uses the word "parish" to refer to the county level. In Alaska, the term borough is used. Counties are larger than municipalities. Each municipality is in a county (or the equivalent), as are unincorporated areas that are not inside the boundaries of any municipality. Counties usually have some elected officials, such as county commissioners and a sheriff. Some are led by a chief administrator or executive.

County governments offer many of the same services as municipalities, on a countywide level encompassing multiple municipalities and areas that do not fall within a municipality. Other common responsibilities include:

State and local governments fulfill many roles and have a number of responsibilities on behalf of the citizens who live within their jurisdictions. To learn more about the role of government in the lives of people who live in the United States, invest some time in learning about national government powers. If you want to learn even more about government, review these examples of political jargon.