Of the many types of logical fallacies, the straw man fallacy is particularly common in political debates and in discussions over controversial topics. The basic structure of the argument consists of Person A making a claim, Person B creating a distorted version of the claim (the “straw man”), and then Person B attacking this distorted version in order to refute Person A’s original assertion.

Often, the distorted interpretation is only remotely related to the original claim. The opposing argument may focus on just one aspect of the claim, take it out of context or exaggerate it. The straw man argument, in this way, is an example of a red herring. It’s meant to distract from the real issue being discussed and is not a logically valid argument. The best way to understand this phenomenon is with some straw man fallacy examples. 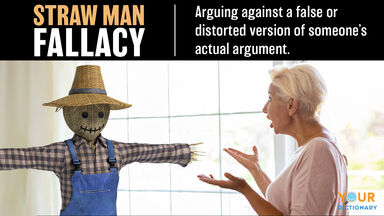 Making a decision is a popular time for straw man arguments to arise. For example, imagine a husband and a wife are trying to decide whether they should adopt a dog or a cat.

Wife: I'd rather have a dog than a cat.

Husband: Why do you hate cats?

The wife never said that she hated cats, only that she preferred dogs. The husband either assumed or pretended that her argument was against cats instead of for dogs. Now the wife must argue that she doesn't hate cats — which completely changes the course of the discussion. This example of a straw man argument is related to slippery slope reasoning.

You Don't Care About My Happiness

Teenagers are experts at straw man arguments. As they learn the ins and outs of adult conversation, teenagers experiment with controlling the direction of a discussion. For example:

Parent: Your curfew is at 10 pm tonight.

Teenager: But the party doesn't even start until 9:00.

Teenager: You just want me to be unpopular! You don't care about my happiness!

Anything that gets an adult off of the main discussion would be considered a win for the typical teenager. If the parent's next comment is defensive, such as "I do care about your happiness," the teenager has successfully turned the conversation away from the undesirable curfew time. With any luck (and some rhetorical skill), they may be able to guilt their parent into an even longer curfew.

The War on Christmas

The inflammatory statement "the war on Christmas" is a straw man argument on both sides of the political spectrum. You may hear (or engage in) this type of discussion around the holidays:

Person A: The children’s winter concert at the school should include non-Christmas songs too.

Person B: You won’t be happy until Christmas songs are banned from being played on the radio.

This example of a straw man argument is related to slippery slope reasoning. Person A may be requesting a more diverse or inclusive selection of songs at the children’s winter concert. However, Person B interprets this request as a desire to remove all Christmas songs from public performance entirely. Whether or not Christmas songs are playing on the radio is not related to whether the children’s concert will include songs from other traditions and holidays, like Hanukkah or Diwali.

Politics is a popular place to find logical fallacies, particularly straw man arguments. Consider the controversial issue of universal healthcare, known on some platforms as Medicare for All.

Politician A: Providing medicare for all citizens would be costly and a danger to the free market.

Politician B: You don't care if people die from not having healthcare.

Politician A's position is about the impact of universal healthcare on the free market, as it would endanger the private insurance industry. Politician B has bypassed that argument and made it about not caring if people die. Now Politician A has to defend their sense of humanity rather than their fiscal responsibility.

Introduction of new technology always invites a variety of opinions. Autonomous vehicles, known more generally as “self-driving cars,” are only one example of technological innovation met with controversy. For example, an opponant of self-driving cars might argue with an advocate in this way:

Advocate: Self-driving cars are the natural extension of active safety and obviously something we should do.

Opponent: You just value new technology over people's jobs. Switching to self-driving cars will endanger driving jobs in the transportation industry. Those jobs are important to the economy and the community.

Both positions are technically correct, but the opponent's argument has nothing to do with the advocate's position. The opponent created a straw man about the transportation industry and claimed the advocate prefers new technology, which is not what the advocate said. If the advocate then responds to the comment about jobs, they have allows the opponent to derail the conversation.

Making a budget is, in a way, forming an argument for your priorities. Politicians do this publically, which leads their constituents to make straw man arguments about what the politicians care about. For example:

Senator: I will vote to increase the defense budget.

Public: Why don't you care about education?

The public has translated the senator's support of more money for defense as a lack of support for education. But did you see the senator mention education at all? This straw man argument can devolve into a hasty generalization by the public as well.

The Theory of Evolution

No one knows where we really came from, and yet the theory of evolution is a hotbed of controversy. And where there's controversy, there's room for fallacies. For example:

Person A: Evolution is one possible explanation for the origins of life.

Person B: Don't ignore the scientific evidence of evolution. It proves that man shared a common ancestor with apes, and that the Earth is over four billion years old.

Can you spot the straw man? Person A didn't say that the theory of evolution is certainly untrue. However, that's the straw man that Person B is arguing against. Person B has steered the conversation away from its original point — evolution being a theory, not a certainty — and now Person A will likely become defensive.

How to Counter Straw Man Arguments

Straw man arguments prevent people from really listening and considering each others' viewpoints. Now that you’ve seen the ways a statement can be distorted or taken out of context, here are some ways to counter those arguments and steer the conversation back on course:

Calmly countering the straw man fallacy allows you to regain control of the topic. This will stop the conversation veering off on a tangent and moving further and further away from the original point being made.

Avoiding Logical Fallacies in Your Arguments

Being able to recognize, identify and understand logical fallacies will empower you to better interpret and evaluate the value of what someone has to say. Beyond the straw man fallacy, you should also be on the lookout for examples of begging the question. Once you're ready for another challenge, take a look at ad hominem arguments. They often work together. A personal attack on a person’s character is often irrelevant when discussing the actual issue at hand!