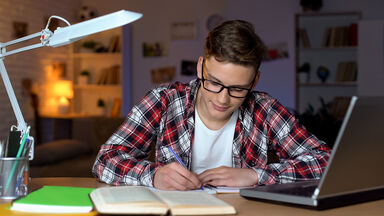 Set this up in two ways, topic by topic or one subject then the other. In point-by-point, discuss each point for both topics in one paragraph. The other option is to discuss one topic in its entirety then go on to the next topic. See both through compare and contrast essay examples.

The book to movie series, Harry Potter, includes several famous and well-known characters. Probably two of the most popular are Harry Potter and Draco Malfoy. While it might seem like these two boys are two sides of a coin, they actually have several similarities in addition to their differences. Explore how to create a fun media compare and contrast example using these popular characters by comparing them in a point-by-point manner.

Can a hero and a villain ever be alike? Strangely, it would seem like the answer to that question would be no. However, when it comes to Draco Malfoy and Harry Potter, the two are more alike than you realize. Comparing and contrasting these two unique characters based on their destinies, families, and friends can show you how Harry and Draco have more in common than one might think.

You can’t control your fate. The truth of these words for Harry Potter and Draco Malfoy drive the paths of their lives. However, how each different boy’s fate unfolds is what makes one considered the hero and the other a villain. Harry Potter is destined to be the “Chosen One”. He did not choose this destiny, but it was thrown on him as a child because of how events unfolded for his family. On the other hand, Draco Malfoy has family expectations of siding with and supporting the death eaters because of his father’s affiliation. Failure to follow Voldemort could lead to not only his death but that of his family.

To read more, just click on the Adobe PDF link below.

Another common essay topic you find when you first get to college is comparing and contrasting how these two are different. Given your first-hand experience, this can make writing this essay interesting. While it might be hard to see the similarities, the differences between these two are easy. Explore how to write a compare and contrast essay by discussing your points for one topic then the other through this example.

Many people believe college is just a continuation of high school. However, the two have distinct differences that can’t be ignored when you walk on to a college campus. And, it isn’t just that newfound freedom! Examine the similarities and differences of college vs. high school by looking at the structure, teaching style, and grading.

In high school, the structure is easy to see. Students have followed it for at least the last 8 years of their lives. Students spend about 6 hours a day or 30 hours a week learning various subjects in structured time increments. To make sure everyone attends, buses usher them to school.

Writing a Compare and Contrast Essay

Writing a compare and contrast essay can seem a little intimidating at first. But, by following a strong format, you’ll have it down to a science in no time. Since you are diving into the deep end of essay writing, check out argumentative essay writing. Get examples and a template to make your writing flawless.