As you prepare to defend your thesis or topic, rebuttal examples can help you create a persuasive argument. Whether you’re practicing for a debate or writing an essay, having a strong rebuttal can mean the difference between losing an argument or successfully convincing people who may not agree with you. 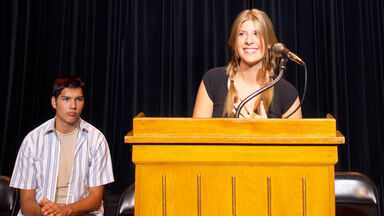 What Is a Good Rebuttal?

In a debate, a rebuttal is the part where you explain what is flawed about the other side’s argument. Some essays and persuasive speeches also have rebuttal sections, in which you anticipate and refute possible arguments against your thesis. Either way, the key to a good rebuttal is proving that the opposing argument is irrelevant or contains logical fallacies. A great rebuttal is organized and easy to follow, and it includes the following:

In the famous first presidential debate between Richard Nixon and John F. Kennedy in 1960, there are several excellent examples of successful rebuttals. Here is one to help inspire you, in which Kennedy disputes the evidence Nixon is using for his argument:

Mr. Nixon: Within the Administration, as a chairman of the President’s Committee on Price Stability and Economic Growth, I have had the opportunity to make recommendations which have been adopted within the Administration and which I think have been reasonably effective. I know Senator Kennedy suggested in his speech at Cleveland yesterday that that committee had not been particularly effective. I would only suggest that while we do not take the credit for it – I would not presume to – that since that committee has been formed the price line has been held very well within the United States.

Mr. Kennedy: Well, I would say in the latter that the – and that’s what I found uh – somewhat unsatisfactory about the figures uh – Mr. Nixon, that you used in your previous speech, when you talked about the Truman Administration. You – Mr. Truman came to office in nineteen uh – forty-four and at the end of the war, and uh – difficulties that were facing the United States during that period of transition – 1946 when price controls were lifted – so it’s rather difficult to use an overall figure taking those seven and a half years and comparing them to the last eight years.

Examples of Different Types of Rebuttals

Rebutting an argument can take several different forms, depending on how you plan to attack. Whether you’re writing an essay or debating, one of these examples may help you plan your rebuttal.

In this type of rebuttal, the key is to attack an assumption supporting the other argument. For example, imagine you are debating or writing an essay on the topic of video games and violence. Your position is that video games do not cause an increase in violent behavior, but the counterargument is that they do. You might make a rebuttal like this:

Another type of rebuttal involves attacking the relevance of the other’s side’s argument. For instance, if you are debating the topic of whether homework promotes learning in students, the opposing argument might be that homework doesn’t take that much of a student’s time. You could use a rebuttal like this:

It’s true that homework doesn’t take that much time, but that point has nothing to do with whether homework promotes learning. Free time is important, but it has no bearing on learning.

A rebuttal can also attack the impact of the counter argument. For example, an opponent might argue that zoos should be banned because they encourage people to see animals as subjects in captivity. You might rebut that argument this way:

Prove Your Point With Logic

The key to a great rebuttal is using examples of logic to prove your point. You can do this in debates, as well as in argumentative essays. If you keep your argument organized and concise and present it with confidence, it will be difficult for anyone to disagree with you. While you're on the topic, dive into what a claim is to better understand your opponent's stance.