Surrealism in Literature: Characteristics and Examples

Surrealism is a movement that focuses on telling a story or conveying meaning via language and/or imagery that really isn’t connected in a logical sequence. It is often confusing, yet conveys meaning even if readers aren’t sure they understand the point or, if there even is a point. Discover key characteristics of surrealism in literature, along with examples of literary works crafted in this style. 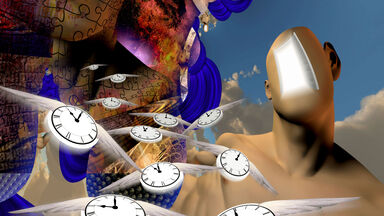 Key Characteristics of Surrealism in Literature

While each piece of surrealist literature is unique, there are a number of characteristics associated with surrealism. You won’t see each of these characteristics in every surrealistic work, but chances are you’ll see at least one — or a few.

Dream and/or fantasy sequences are often included in surrealistic works. Sometimes we read an entire work of literature only to find out the entire story was someone’s dream. The Wonderful Wizard of Oz is a great example of a work based entirely on a dream that’s filled with fantasy. Readers are right there with Dorothy and the talking scarecrow, tin man and lion on their fantastic journey only to discover at the end (spoiler alert) that she dreamed the whole thing.

When you read a surrealistic work, expect irrationality. The goal of many who write in this style is to free readers from rational thought and the constraints of reality to explore what is possible, or even what can be learned or enjoyed from considering the impossible. An example would be having a person transform into an animal or a book turn into a bird. Another could be a situation in which a piece of furniture represents a gateway to another realm of reality (sound familiar?).

For example, an author might compare something like a shoe or watermelon to a hammer or ice scraper. Surrealistic works often emphasize the juxtaposition from a person’s dreams or fantasy life and the reality in which they live. When a book reveals a sequence of what a character fantasizes about doing followed by their actual actions, which are completely different, that is juxtaposition.

In surrealistic works, characters are often driven by their unconscious minds which, of course, lead to behaviors motivated by factors unknown to them. Sometimes readers know, through an omniscient narrator, what is going on, but other times they are left wondering why the character behaves a certain way. This is common in the horror genre, which often includes surrealism. For example, when characters get up and go to a certain place at the same time each day (as in The Amityville Horror), driven by forces of which they are not conscious, such actions are surrealistic.

Examples of Surrealism in Literature: Books and Writers

Words that are often used to describe surrealistic literature include disjointed, bizarre, and juxtaposed.

A Wrinkle in Time (Madeleine L’Engle)

A Wrinkle in Time, a classic young adult novel by Madeleine L’Engle, is a superb example of surrealism in literature. Published in 1960, this book is clearly a work of science fiction, though it's one that is surreal in its entirety. This unique story unfolds in multiple worlds with differing timelines.

The central characters are young children, the weird kids in the class, who take a leap of faith to leave the world they know and enter another realm, all to save someone they love. The story is larger than life, emphasizing good versus evil, the power of knowledge, the value of family and the strength of friendship, but in a disjointed, irrational manner inside a fantastical world. There are even elements of unconsciousness, as the youngest hero feels such a strong tie to the other world without being consciously aware of its existence that he inspires the others to believe.

In Franz Kafka’s 1912 book The Metamorphosis, the main character (Gregor Samsa) literally turns into an insect throughout the course of the book, a concept that is purely surrealistic. It’s widely recognized as a social commentary on the way people are valued in capitalistic society and the dehumanization that occurs when one loses the ability to financially provide for others. Upon losing the ability to financially support his family, which seems to be all they care about, his physical being devolves to that of an actual insect, which, of course, cannot actually happen.

The Wonder That Was Ours (Alice Hatcher)

Speaking of insects, after you read Alice Hatcher’s The Wonder That Was Ours, you’ll never think of a taxi ride quite the same way again. The narrators are cockroaches residing in a cab on a Caribbean Island. The cabbie reads to them and they talk to the book’s readers. They tell the tale of what unfolds after a deadly virus outbreak on a cruise ship causes an economic collapse and intertwines the fate of the protagonist (the black cab driver) with a pair of white American passengers who debarked the ship and a local who’s in trouble with the law. Published in 2017, this surrealistic tale explores timely issues of race, class, compassion, and the impact of a pandemic.

Now that you know the key characteristics of surrealism and have reviewed some examples, it’s a great time to explore this form of artistic expression even further. Surrealism isn’t limited to literature. You’ll also find it expressed in art, movies and theater. To start delving deeper into the world of the surrealists, get to know the work of renowned artist Salvador Dali. Before you do, though, you may want to boost your ability to describe what you see by reviewing a list of descriptive words to critique art.