The way you perceive the world is unique. Based on your interactions with words, ideas, and events, different objects, or words, can have different meanings to you. Explore different examples of symbolic interactionism at play in society. 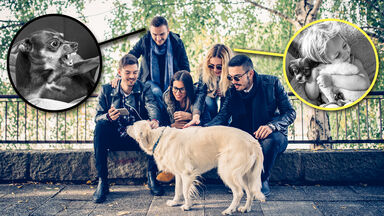 Symbolic experience with a dog
Advertisement

What Is Symbolic Interactionism?

While it might seem like a big name, symbolic interactionism is how your experiences add subjective meanings to symbols and letters. For example, the word ‘dog’ is just a series of letters. Through your interactions with the letters ‘dog’, you see this as a furry, four-legged canine.

But it doesn’t just stop there. Depending on your experiences with dogs, this arrangement of letters could hold negative or positive meanings. For example, if you were bitten by a dog as a child, then the letters ‘dog’ could make you afraid. However, if a dog was your best friend growing up, then ‘dog’ might hold a positive connotation.

While everyone knows what the letters ‘dog’ means, a canine animal, the meaning the word holds for you is subjective. Therefore, your interactions color the symbolic meanings assigned to words, objects, thoughts, events, and people. Explore some other examples of symbolic interactionism.

When looking at a complex theory, it’s always best to start simply. Some symbols are easy to recognize and hold concrete meanings within societies. While some can be subjective, a few symbols you recognize through your interactions with them are:

Examples of Symbolic Interactionism in Society

Gender can be understood through symbolic interactionism because gender is a sociological construct. For example, for the symbols attached to “males” and “females”, actions and looks are based on what is believed is true from your interactions rather than what is objectively true. For example, women might be seen as weaker than men. A man wearing a dress might be seen as feminine. These problematic attributes lead to inequality and biases such as women getting paid less than men in the workforce.

Race and ethnicity is another area where symbolic interactionism comes into play. This can definitely be seen through the issue of colorism. In colorism, people of the same racial identification are treated differently based on the lightness or darkness of their skin. For example, a study by Lance Hannon on colorism demonstrated lighter-skinned Latinos "looked" smarter according to Caucasians.

Societies’ meanings behind symbols can change and morph with time. One example of this is the meaning of a rainbow. The rainbow has been seen as a Christian symbol of hope but another meaning of rainbow is now associated with the LGBTQ community.

The way you see the world colors your understanding of it. Look no further than symbolic interactionism to see how this is true. Interested to explore more about behaviors, check out operant conditioning examples.