Synesthesia Examples in Literature and Poetry

Can the sound of a symphony be rich like chocolate? Has the yellow sun ever been silent? In literature, all things are possible through figurative language. Synesthesia is what literary writers and poets use to create a melting pot of sensations. Determine what this literary technique is through a clear explanation and several synesthesia examples. 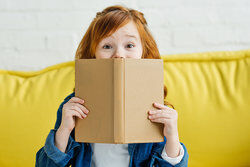 Can you hear the rich taste of chocolate? In the literal sense, no, of course you can’t. But, literature uses the mashing of the senses to create colorful works of reading delight.

Synesthesia is the term used in literature when one sense is used to describe another. This is a form of simile or metaphor where you use different senses to create an interesting picture in the reader's mind. For example, an author might say that the speaker had a “sweet, silky voice.” In this short phrase, you are using the sense of taste, touch and sound. This gives you a visual image of a voice that is soothing and enjoyable to the ears.

To get a better idea of synesthesia in literature, inspect the following original example by Jennifer Betts.

The Loudness of Color

The music of white dances softly around

The soft silence and blue are bound

Purple is calm, the sound soft and sweet

The brightness of a rainbow is a hypnotic beat

In yellow, the silence is loud

While red is a yell, robust and proud

Throughout the poem, seeing and hearing are used to understand color. Red doesn’t actually yell, but many would describe it as loud. Blue, on the other hand, is softer and less “in your face.” Using sound to describe color makes it fun and interesting for the reader.

Synesthesia in literature or poetry is a literary device that writers can use to create interest in the work. However, synesthesia can also be found in psychology. People with synesthesia have a neurological disorder where when they experience one sense, they involuntarily experience another. With this disorder, someone might actually see sound or taste colors.

Examples of Synesthesia in Poetry

Examples of synesthesia in poetry are abundant. This figurative language really lends itself to engaging descriptions for readers. Dive into a few famous poetry genre examples.

I hear the Odyssey and Iliad rise

Henry Jerome Stockard uses the color silver to describe a voice. In this instance, the silver voices are waking the water. It makes you think of a voice that is clear and musical like an instrument.

Ode to a Nightingale by John Keats

In some melodious plot,

In this example of synesthesia, Keats connects visual and auditory senses. The description of the plot of ground and how it sings of summer give the visual more depth and feeling.

The Odyssey by Homer

Come this way, honored Odysseus, great glory of the Achaians, and stay your ship, so that you can listen here to our singing; for no one else has ever sailed past this place in his black ship until he has listened to the honey-sweet voice that issues from our lips; then goes on, well-pleased, knowing more than ever he did; for we know everything that the Argives and Trojans did and suffered in wide Troy through the gods' despite. Over all the generous earth we know everything that happens.

Homer uses visual and auditory words to describe the sirens' voices. When you hear the “honey-sweet voice,” you envision a tempting and delightful voice that makes you crave even more.

The Spirit of Poetry by Henry Wadsworth Longfellow

To have it round us, --- and her silver voice

Is the rich music of a summer bird,

Heard in the still night, with its passionate cadence.

In this example, Henry Wadsworth Longfellow is using a color and taste to describe a sound. By saying that her voice was silver, Longfellow is asking you to decipher the cadence and tone of her voice. The music was also rich, which is used to describe an intense flavor.

I Heard a Fly Buzz - When I Died by Emily Dickinson

Between the light and me;

And then the windows failed, and then

could not see to see.

Blue is used to describe a buzz by Emily Dickinson. This synesthesia is effective in allowing you to see and hear the way that the person felt right before death. It gives an assault of the senses to get the point across.

The Divine Comedy by Dante Alighieri

And as one who is eager for gain, weeps, and is afflicted in his thoughts, if the moment arrives when he loses, so that creature, without rest, made me like him: and coming at me, little by little, drove me back to where the sun is silent.

Dante creates a unique synesthesia example in his silent sun. The sun is something that you can feel and see, but you definitely don’t hear it. This synesthesia makes you understand how the narrator is driven back to a place that cannot truly exist.

Poets aren’t the only ones to effectively use synesthesia in their writing. Several novel authors throughout history have also used this sensory simile example to give their writing a unique flavor. Delight your senses through these fun literary examples.

The Whole World Over: A Novel by Julia Glass

The word would fill her mind for a few minutes with a single color: not an unpleasant sensation but still an intrusion… Patriarch: Brown, she thought, a temple of a word, a shiny red brown, like the surface of a chestnut.

In her work, Glass creates a unique combination of the psychological disorder synesthesia and synesthesia in literature to create a complex literary world. The excerpt shows how the character Saga’s mind works to meld the sound of the word “patriarch” with the color brown.

The lights grow brighter as the earth lurches away from the sun, and now the orchestra is playing yellow cocktail music, and the opera of voices pitches a key higher. Laughter is easier minute by minute, spilled with prodigality, tipped out at a cheerful word.

The Melding of Senses

Using one sense to describe another can create a unique and interesting image within a literary work. Want to learn more about figurative language in literature? Go beyond similes to explore some fun metaphor examples.