The term synopsis refers to a piece of work that is a summarization of a larger piece of work. A synopsis can be written in the form of tables and charts, as prose, as an abridgment, or even as a consolidated re-write of the original work. Explore what a synopsis is in more depth and several synopsis examples. 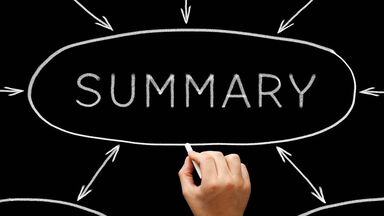 What Is a Synopsis?

By definition, a synopsis is a summary of a composition like a book, movie, TV show, or academic paper. A synopsis is often written but can also take verbal or visual form. An individual can give a shortened verbal account of an event or written work, which would be a synopsis. Additionally, the production of a video synopsis exists as well, in which a longer piece of work is summarized in a shorter video.

Typically, when you look at the back of a book, you can find a short synopsis. Publishers generally use this type of synopsis to entice the reader into reading the entire novel. A literary synopsis might also be used by academic institutions to provide a student with a clear overview of a story or by a writer to provide an overview to publishers. Dive into a variety of short literature synopsis examples.

Synopsis Example of Harry Potter and the Chamber of Secrets

In her second installment of the Harry Potter saga, J.K. Rowling takes readers through the adventures of Harry Potter at the Hogwarts School of Witchcraft and Wizardry. A mysterious warning from an elf keeps Harry on his toes as he begins to unlock the secrets of Tom Riddle, talking spiders and a unique journal.

In Victor Hugo’s 1860s novel, a man is arrested for stealing a loaf of bread. He spends 20 years in jail, gets out and remakes himself as a new man and a town mayor. He rescues the child of a poor woman and raises her. A police detective cannot see that he is changed and haunts the man, but when they encounter each other during the French Revolution, the former thief lets the detective go with his life.

While generally under the heading of literature, fairy tales are unique because they have so many adaptations. However, the general synopsis for this type of literature is still the same.

The well-known fairy tale of Cinderella explores her servant-like relationship with her cruel stepsisters and a cruel stepmother. When a prince invites the whole family to a ball, Cinderella tries to join them only to be knocked down by her family. A fairy godmother visits her and dresses her up to go to the ball, and the prince falls in love with her. Losing her shoe at midnight, it becomes a hunt for the prince to find his true love at the odds of her stepfamily.

Synopsis Example of The Little Mermaid

In this classic fairy tale, a mermaid, Ariel, falls in love with a man and tries desperately to become human so that the man will fall in love with her as well. After giving her voice to a sea witch, she can eventually triumph and become human, so she can live happily ever after with the man she loves. However, the witch has a few tricks up her sleeve to keep Ariel from getting her heart’s desire.

Another common area you might see a synopsis is of a play. Much like a literature synopsis, a play synopsis is meant to entice you to watch a live performance, or it could just be used to provide an overview for students. Read through a few examples of famous play synopsis examples.

Synopsis Example of Romeo and Juliet

One of William Shakespeare's greatest plays, Romeo and Juliet, follows two people from warring families as they meet and fall in love despite their family’s disapproval. Through several missed chances and miscommunications, they end up killing themselves for love.

Synopsis of Death of a Salesman

Arthur Miller’s famous play Death of a Salesman follows the last 24 hours of a Willy Loman’s life. Unable to accept change, Willy starts to lose his identity due to his self-centered nature. Through an array of memories and arguments with family members, viewers start to understand what leads to Willy’s suicide.

A synopsis is commonly found on movie posters or digital streaming sites. Studios often release a synopsis for watchers that outlines the show. See a few film synopsis examples in action.

Synopsis Example of The Sound of Music

This classic musical follows as the nun, Maria, leaves the convent to be a nanny for the Von Trapp family, including a widowed naval captain and seven children. She falls in love with the father and leaves the country with them to escape the Nazis.

A Disney animated classic, The Lion King, follows the turbulent growth of Simba. A baby lion is born to be King, but his cruel uncle, Scar, kills his father, Mufasa, and sends the baby away. The baby lion returns to fight his uncle and take his rightful place.

If producers didn’t give you a clue what a TV show might be about, would you be as interested in it? Probably not. Therefore, TV stations and producers use engaging synopsis for their shows to get viewers to watch.

Featuring several seasons, The Sopranos follows Tony Soprano and his mob boss family. A New-Jersey based Italian-American, he sees a psychiatrist and discusses work and family problems.

A staple TV show of the 90s, Seinfeld showed four friends who lived their lives in New York City. It follows the antics of Jerry Seinfield, a stand-up comedian. His friends, George, Elaine and Kosmo, help him get through several hilarious situations found in everyday life.

When it comes to academic research, the papers can get long. Therefore, these typically have a synopsis, formally called an abstract, at the beginning of the article. This abstract provides readers information on what is included in the research study and other pertinent information they might need to decide if this paper will be helpful to them. Research paper abstract examples can help show you how these synopses are composed. Explore an abstract example from Med Hypotheses.

"As the current COVID-19 pandemic develops and epidemiological data reveals differences in geographical spread and risk factors for developing a severe course of illness, hypotheses regarding possible underlying mechanisms need to be developed and tested. In our hypothesis, we explore the rational for a role of MTHFR polymorphism C677T as a possible explanation for differences in geographical and gender distribution in disease severity."

How to Write a Synopsis

Map Out Characters and Plot Points

In a fiction work, like a novel or TV show, this includes the inciting incident, rising action, climax, and resolution. You also give the readers a quick overview of your characters, personality traits or motivations. In a non-fiction work, you provide an overview of what the paper or work is about.

It’s important to highlight the unique parts of the non-fiction or fiction work. Provide the readers with something to entice them into reading the document or work, along with why they should. For example, you can point out the voice, unique plot twists or points of view of a novel.

A synopsis isn’t very long, so it’s important to get your points across fast. Therefore, after writing your synopsis, read it over to see if there is any way you can tweak it to make it more clear. Explore areas that you might have gotten a bit too wordy on.

Now that you have seen lots of different synopsis examples, try making one of your own. You can also explore how to write a shorter synopsis, known as a logline. Need more examples in your life? Give plot of story examples a look through.