Along with diction, syntax is a fundamental part of written language. Diction defines the style of written or spoken language, representing the choices a speaker or writer makes within the rules of grammar and syntax. Syntax states the rules for using words, phrases, clauses and punctuation, specifically to form sentences. 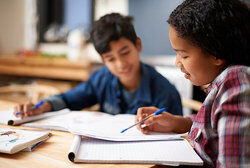 Girl and boy studying together as syntax examples

Correct syntax examples include word choice, matching number and tense, and placing words and phrases in the right order. While diction can be flexible, especially in casual conversation, proper syntax is comparatively strict. Following the rules of syntax is vital in formal writing of all kinds, and it is a clear sign that a writer is capable and well-informed.

Fundamentally, syntax is about structure. The rules of syntax exist to make sentences clear and consistent. There are a variety of common syntactical mistakes, and all are easy to fix once a writer knows what they're doing wrong. For instance:

Here, the problem is a misplaced modifier. A modifier is a word or phrase intended to change, or modify, another part of the sentence, typically the subject. Misplaced modifiers make sentences unclear, because they could be modifying more than one subject.

In the second incorrect example, the sentence is stating that the "the trip home" (subject) was "happy about her upcoming promotion," which doesn't make sense. Instead, it is "Sammie" who is the happy individual with a promotion, as stated in the correct sentence.

Here is another example of that:

The incorrect sentence lacks a subject. The mistakes aren't looking over the exam. To make sense, the sentence needs something or someone to perform the action it describes. It's a question of independent and dependent clauses.

Another set of common mistakes have to do with punctuation.

The problem here is a run-on sentence. The absence of punctuation makes the statement appear vague and rushed. Breaking the words into two sentences with an exclamation point adds clarity and increases the impact of "Come for a visit!"

This example has the opposite problem: it's a sentence fragment. A sentence fragment like "before we go to the movies" doesn't make a complete statement. Without the addition of "I need a nap," the reader doesn't know the writer's intent.

The following example has a similar problem, but requires a different solution.

The incorrect example is a broken sentence. The difference is that "You can't go to the movies" could be a complete sentence in itself, but it is followed by a phrase that needs to be incorporated into it. Instead of simply adding more text, the solution to a broken sentence is to combine the pieces.

Another example of a punctuation problem is simply failing to use it where needed.

The mistake in the incorrect example is comma placement, or more accurately the lack of it. Proper syntax requires at least one comma to separate a list of three items. "The house is dusty, filthy, and stinky" is also syntactically correct, using the "Oxford comma" (also called the serial comma) to separate the last item on the list. Either usage is generally acceptable, though specific style guides typically prefer one over the other.

There is also the syntactical question of word choice. This is the area in which the rules of syntax offer the most leeway, and consequently perhaps the easiest area in which to make mistakes.

Modern English, however, expects sentences to go subject-verb-object rather than object-subject-verb. It's a perfect example of how the rules of syntax change with place and time, and that the first priority of any writer should be clear communication. For further help, read up on subject-verb agreement.

On the subject of tricky verbs…

The incorrect example uses the wrong verb tense. Specifically, instead of using the past simple tense, "was speaking" uses the past continuous tense. It suggests an act in the past that may still be going on. If you "were speaking," you may still be speaking. "Spoke" is the past simple tense, indicating an act that already happened and is now over. If you "spoke," you're done speaking now. The latter is appropriate here.

Even innocuous little prepositions like "to" can pose syntactical challenges.

Here, "to" is simply an unnecessary word. While many languages require an infinitive ("to verb") in constructions like "she made him to verb" or "they told her to verb," English doesn't. "Made her call" is sufficient without the word "to."

Word choice may seem minor, but the selection of just one word versus another can completely change the meaning of a sentence.

The problem here is "can" vs. "should." This is a classic example of syntax being strict where diction is lax. In common usage, "can" frequently substitutes for "should" or "will." In formal syntax, those words have three distinct meanings. "Should" describes a likely outcome, "will" describes a certain outcome, and "can" describes merely the possibility of an outcome.