Theme vs. Motif: Differences and Connections

While theme and motif both provide insight into the overall message of a work of writing, the two terms are not identical. Explore theme vs. motif to clarify your understanding of these two related — but not identical — concepts. 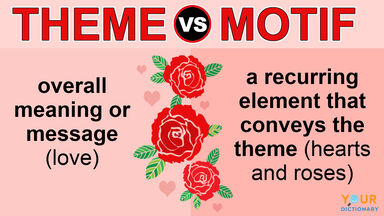 theme vs motif with hearts and roses example
Advertisement

Theme is a broad term that relates to the overall message or meaning of a literary work. Sometimes the author clearly articulates the theme, but not always. When the theme is not clearly stated, the author uses one or more literary devices to overtly convey the theme to readers.

A motif is a recurrent element within a work of literature that serves the purpose of developing or helping to reveal the theme. Motifs can appear in many forms, including ideas, images, sounds, symbols, and words.

All motifs have two things in common: (1) they are used multiple times in a work of literature and (2) their purpose is to convey the work’s theme.

Many books that students read in school have themes that are revealed, at least in part, through motifs. Review a few examples of motif vs. theme.

There are many additional examples of motifs in works of writing. There are also many more examples of theme in literature.

How Does Motif Relate to Symbols?

Since motifs can be symbols, it’s not surprising that people sometimes think that motifs and symbols are the same things. Symbols sometimes function as motifs in a work of literature, but not always.

Motif is very important in writing, as is theme. Motifs help bring the theme to life in a very real way. Their repetitive nature helps reveal and reinforce the most important themes of a work of writing. They provide readers with a consistent context within which to interpret the work while adding depth to the overall story.