Types of Characters in Fiction

Picking up a book is a great way to meet new people. Although there's always a main character, whom we learn the most about, he or she plays off other characters. This makes the other characters important too because, through each interaction, we learn more and more about the main character. This is otherwise known as characterization. 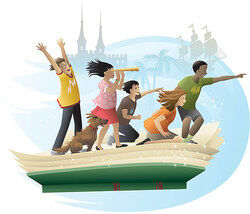 Types of Characters in Fiction

There are nine types of characters generally found in fiction (and movies too). All of them have a role to play in driving the story, regardless of how large or small that role is.

Let's take a look at the types of characters in fiction. Once you're aware of the different character types, you'll find yourself noticing them more and more. The next time you pick up a novel, see how many you can spot.

We must begin our study with the protagonist, or main character. The protagonist is the central figure around whom the story revolves, like Katniss Everdean in The Hunger Games. Throughout the story, we will watch him or her (or them) face conflict that must be resolved and make key decisions that move the story forward. Protagonists are often heroic, like Katniss, but they don't have to be.

If you're writing in the first person and choosing to tell your story through a narrator, that will typically become your protagonist. However, that's not a hard and fast rule. Consider The Great Gatsby. In this novel, F. Scott Fitzgerald made Nick the narrator, even though Gatsby was the protagonist.

Take Jack Sparrow from the Pirates of the Caribbean movies. He's hard not to like, even though he wouldn't be considered a first-rate citizen. Or how about Lestat de Lioncourt from The Vampire Chronicles? That's one vain man (vampire). Yet, he has moments of altruism, making him difficult to hate too.

Characters like Jack and Lestat are antiheroes. Given their ability to dip in and out of deviant behavior, they can be exciting characters. There's a lot of depth to them. And as they color outside the lines, they, too, will have to face some type of conflict.

Good, bad, or otherwise, most main characters will be faced with an antagonist, or villain. Often, this is the person that stands in the way of - antagonizes - whatever the main character is trying to achieve. Antagonists will set out all kinds of roadblocks and be the source of several drama-filled scenes.

Interestingly, the antagonist doesn't have to be another person. It can be something the protagonist is facing internally, like addiction, anxiety, depression, or loneliness.

Can you name Gatsby's antagonist? Well, all Gatsby wanted was Daisy. But, he couldn't have her because she was married to Tom Buchanan. This makes him the guy Gatsby had to face off against. Beyond that, Tom was particularly unlikeable because he was cheating on Daisy, but wouldn't let her be with the love of her life - Gatsby.

For example, if the protagonist is loyal, brave, and morally sound, each of those qualities will be augmented every time we read more about the foil character who's disloyal, cowardly, and selfish.

In The Great Gatsby, there's no doubt Tom Buchanan was a foil to Gatsby. They stand in opposition to one another. Tom came from money, Gatsby came from poverty. Tom is a "rough and gruff" kind of guy while Gatsby is more sensitive and quiet. However, you could argue the Nick Carraway is also a foil to Gatsby. Nick began as realistic, practical, and ethical against Gatsby's flashy, flighty, and dishonest ways.

For a deeper dive into human idiosyncrasies, check out our Character Trait Examples.

A dynamic character is one who evolves or changes significantly over time. This label is often reserved for the main character, given the conflict they're trying to overcome. If they come out the other side, they've typically grown or evolved in some way.

Let's remain with The Great Gatsby. As mentioned, F. Scott Fitzgerald did something interesting with his creation of the narrator, Nick Carraway. Nick's evolution throughout the novel was extreme. He was a nice, hard-working boy who just wanted to secure a role on Wall Street. Then, he met Gatsby and everything changed. By the end of the novel, Nick was totally disillusioned, sick of everything Wall Street stood for, and disgusted by his rich friends.

In contrast to a dynamic character, a static character does not change over time. Perhaps this is someone like the main character's father or mentor. They might be consistently wise, or abrasive, or enlightening. This label is often reserved for peripheral characters.

Daisy's friend Jordan Baker in The Great Gatsby could be considered a static character. She didn't change much throughout the course of the novel. She had her own career as a pro golfer and sort of stood on the periphery of the novel. Sure, she was there for all the dramatic moments, a foil to Daisy, but she remained unchanged.

Have you ever encountered a character with a difficult mother or spouse? You can't tell whether they love or hate them. If so, you could consider that "difficult person" a round character.

This is someone with a complex personality. They're neither overtly kind nor innately cruel. They may act inconsistently, rather than follow a smooth arc. Somewhere deep down, they're most likely conflicted and, to the main character and the readers, perhaps even a little contradictory.

In The Goldfinch by Donna Tartt, you'll meet a round character in Boris. It would be easy to label him a bad person, given his propensity for stealing. However, he's more than that. He's also loyal to the main character, Theodore. So, while he may be self-serving, he's also capable of friendship and kind acts. All these facets make him a very round character.

To help you develop your own round characters, check out our Examples of Personality Traits.

In Hamlet, Hamlet's mother, Queen Gertrude, is an example of a flat character. She's opinionless and, worse, a little clueless. She doesn't see that Claudius used her to seize the throne. In fact, most of the characters, especially Claudius and Polonius, use her as a pawn and she is completely unaware.

Stock characters, also known as archetypes, are the ones that get repeated time and time again. They're clichéd or stereotypical. For example, how many times have we met the kindly gray-haired grandmother, the nerdy kid with glasses, the less-attractive best friend, or the absent-minded professor?

Other instances include the seductive femme fatale such as Poison Ivy, or the buttoned-up school teacher like Professor McGonagall. These expected traits make them more of a flat character than a round character as these characters are often one-dimensional and don't develop.

Meet New People on the Page

If you read a little every day, you're bound to meet someone new each time. Maybe you'll look up to them, as in a brave and intelligent protagonist. Or, maybe you'll despise everything about the antagonist because he reminds you of your ungracious and demeaning brother. Either way, fiction takes us out of our everyday lives and plunges us into the depths of someone else's saga. Have fun meeting new people along the way.

While you're there, watch them conquer the elements of a plot, from the introduction to the rising action, right through to the conclusion.