Fiction writing would be nothing without a smattering of rhetorical devices. Bland lines like, "She was mad," are turned into colorful canvases like, "Her rage knew no end. Nothing more than a whitecap on the crest of a wave, she flung herself into battle with the fervor of a beast." 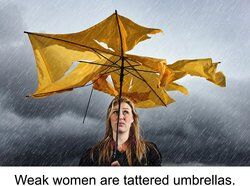 Comparing a woman to the whitecap of a wave is a metaphor. You're saying, "She was in a fury," without having to say it. In an effort to help you craft the most entertaining and suitable metaphors, let's take a look at the various types of metaphors.

The primary metaphor is the most basic of metaphors. You've likely heard many primary metaphors throughout the course of your life and studies. Consider the classic sayings "love is blind" and "patience is a virtue." In these metaphors, two items are compared, side by side, and the meaning is clear.

In truth, these examples range on the border of dead metaphors. So, hold on for the ride. We're about to address those metaphors too.

Complex metaphors are a combination of primary metaphors. With these, you're comparing two or more subjects.

An example might be, "Travel is no more than a sorcerer's cauldron full of emeralds." You might have to elaborate a bit on these metaphors after you've laid them on your readers. Hopefully, they'll understand your meaning, considering a sorcerer's cauldron is full of magic and emeralds are a powerful stone.

A dead metaphor is akin to a cliché. It's a metaphor that's so overused, the entire crowd roars with eyerolls. Many of these come from exhausted love poems.

How many times have we heard someone say, "I'd be lost without you?" In fact, dead metaphors are sometimes deliberately used to invoke an eyeroll or slather on sarcasm.

When you find yourself teetering dangerously on the edge of a dead metaphor, consider a creative metaphor instead. Make up your own! Just be sure you're writing in terms your audience will grasp.

If you're writing a novel about a time traveler, perhaps you'll come up with something fresh like, "The castle door whooshed open, reaching for her faster than a knight's gauntlet."

A creative metaphor could lead you down the colorful path to an extended metaphor. That is, you'll be able to take that metaphor and keep referring back to it throughout an entire paragraph or the whole of your work.

Let's take the example of the knight's gauntlet at the castle door. After the main character steps through the door, perhaps she's met with an actual knight. You can use another metaphor to describe him, referencing time travel or his armor.

For example, the character might go on to notice that his gauntlet was colder than her brother's scowl. Extended metaphors are the romantic partners of creative metaphors because the ball's completely in your court and, when you've struck upon a good image, you can refer back to it a time or two again.

These metaphors are a tricky bunch. You must be very careful with them because they compare two terms that aren't related. Instead of painting a fetching scene, readers might be fetching your book from the fireplace.

Absolute metaphors, also known as paralogical metaphors or antimetaphors, can frustrate readers if they don't understand the connection you're making between the two. Or, worse, you face crafting a line that was meant to be insightful but just comes across as nonsensical.

An example might be, "Love is death by pampering." What exactly would the writer be getting at there? But, don't shy away from these, either. If you do it right, the local book club will be picking apart your lines over a heated debate with tea and scones.

These metaphors take one subject and illustrate it in different terms. Have you ever heard a scorned lover say she "lost two weeks of her life on him"?

She means she wasted time on him but she's using the calendar year to make her point. Think of conceptual metaphors as substitutes - they interchange two ideas to say something with a little bit more color.

Have you ever encountered a pack of mean girls? They tend to say things without actually saying them. For example, they might say, "Hanging out with her was worse than my date with Frankie."

At this point, the audience would know that Frankie, whoever he is, is unpleasant to be around. Therefore, spending time with her would be less-than-desirable. Implied metaphors live in the realm of subtlety and sarcasm.

Mixed metaphors are often reserved for comedy. They deliberately combine two metaphors that are incongruous or outright absurd.

Root metaphors are directly related to a person's culture, identity, or perception of life. You can see how they earned their name. These are concepts that are deeply rooted within a person. They tend to be a tad more serious and, sometimes, even difficult to spot.

Root metaphors are able to make sweeping or philosophical statements that tell us more about a character. For example, "Weak women are time-sucks." If the main character says this, you can tell she has a deep-rooted belief in the importance of personal strength and perseverance. Perhaps that's a cultural feeling; perhaps it's merely a part of her personal identity.

Metaphors Used in Literature and Movies

With a firm grasp on the many different approaches to metaphors, let's take a look at some of them in action.

Let's start with the world of novels.

Bobby Holloway says my imagination is a three-hundred-ring circus. Currently I was in ring two hundred and ninety-nine, with elephants dancing and clowns cart wheeling and tigers leaping through rings of fire. The time had come to step back, leave the main tent, go buy some popcorn and a Coke, bliss out, cool down.

Her mouth was a fountain of delight.

The Fault in Our Stars, John Green

The sun was a toddler insistently refusing to go to bed: It was past eight thirty and still light.

The parents looked upon Matilda in particular as nothing more than a scab. A scab is something you have to put up with until the time comes when you pick it off and flick it away.

Next, we can explore a little poetry.

She is all states, and all princes, I.
Nothing else is. Princes do but play us; compared to this,
All honour's mimic, all wealth alchemy.

"Hope Is The Thing With Feathers," Emily Dickinson

Hope is the thing with feathers"
That perches in the soul,
And sings the tune without the words,
And never stops at all.

All our words are but crumbs that fall down from the feast of the mind.
Thinking is always the stumbling stone to poetry.
A great singer is he who sings our silences.
How can you sing if your mouth be filled with food?
How shall your hand be raised in blessing if it is filled with gold?
They say the nightingale pierces his bosom with a thorn when he sings his love song.

And finally, let's end with some of our favorite movies.

"I don't want you to blow up the house."

In this line, Steve Carell's character is pretending to help his wife fix the water heater. The water heater's not really broken. Rather, they're separated and she just used it as an excuse to talk to him. Although he certainly doesn't want her to blow up the house, the audience could argue this was a metaphor for their failed marriage. He didn't want her to further destroy the family, house, and home.

"If you build it, they will come."

"It's a hard grape to grow. Thin skinned, temperamental. It ripens early. It's not a survivor like cabernet."

In this scene, Paul Giamatti's character is asked why he prefers one varietal of grape, pinot noir, over another. His reply answers the question bluntly, but also serves as a metaphor for how he views himself.

Paint colorful scenes with the tip of your pen. Allow readers a glimpse into your characters' minds with creative comparisons that reveal more information. Through the use of metaphors, readers can align themselves with the fictional people they're growing to love - or hate.

On a final note, it's worth a quick note about similes. We often see them grouped together with metaphors. Both compare two (or more) subjects with color and intrigue. The main difference between the two is similes employ the words "like" or "as" in their constructs. She's like a delicate flower.

As you set gracious scenes and develop enigmatic characters, take a look at these character trait examples. See how you'd like your favorite man or woman to unfold. With only a slight difference in definition, you'll also want to consider your characters' personality traits. Allow these examples to be your guiding light.