7 Common Types of Poetry and Their Unique Features

Poetry, in its own way, is a form of artistic expression. But did you know there are over 50 different types of poetry? Outside of upper-level poetry seminars or in-depth studies, most educators tend to focus on seven common types of poetry. Learn more about these seven types. 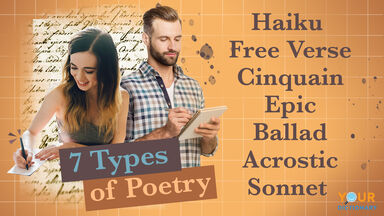 The world of poetry is vast. From rhyme and meter to rhyme and imagery, you can find a little bit of everything in this writing genre. However, when you are learning about poems, a few different ones stick out. Popular poetry types include haiku, free verse, sonnets, and acrostic poems.

It's one thing to define each type; it's another to enjoy a sample platter. Ready to open the doors to a world of verbal artistry? Let's dive into some of the more prominent forms of poetry while we savor a few samples.

Traditionally, haiku poems are three-line stanzas with a 5/7/5 syllable count. This form of poetry also focuses on the beauty and simplicity found in nature. As its popularity grew, the 5/7/5 formula has often been broken. However, the focus remains the same — simple moments in life. For more, take a look at these rules for writing haiku. Now, let's enjoy two short samples.

Sick on a Journey by Basho

Basho is one of the haiku greats. He has several different beautifully composed poems under his belt. "Sick on a Journey" by Basho is a great example of a haiku.

"Sick on a journey -
Over parched field
Dreams wander on"

In "5 & 7 & 5," Anselm Hollo demonstrates the 5/7/5 haiku syllable count across multiple stanzas. Explore an excerpt of her work.

The genre of free verse poems is the least defined. In fact, they're deliberately irregular, taking on an improvisational bent. There's no formula, no pattern. Rather, the writer and reader must work together to set the speed, intonation and emotional pull.

This is Marriage by Marianne Moore

"This is Marriage" by Marianne Moore is a great example of free verse poetry. It demonstrates the lack of pattern and freedom of thought.

"This institution,
perhaps one should say enterprise
out of respect for which
one says one need not change one's mind
about a thing one has believed in,
requiring public promises
of one's intention
to fulfill a private obligation:
I wonder what Adam and Eve
think of it by this time,"

The format of "Little Father" by Li-Young Lee contrasts "This is Marriage" considerably, as you can see in the excerpt.

"I buried my father
in the sky.
Since then, the birds
clean and comb him every morning
and pull the blanket up to his chin
every night.

I buried my father underground.
Since then, my ladders
only climb down,
and all the earth has become a house
whose rooms are the hours, whose doors
stand open at evening, receiving
guest after guest.
Sometimes I see past them
to the tables spread for a wedding feast."

A cinquain is a five-line poem inspired by Japanese haiku. There are many different variations of cinquain including American cinquains, didactic cinquains, reverse cinquains, butterfly cinquains, and crown cinquains. Let's enjoy a sampling from the ever-popular Edgar Allan Poe, as well as a snippet from George Herbert.

To Helen by Edgar Allan Poe

You can't look at a cinquain without checking out a great. "To Helen" by Edgar Allan Poe is a masterfully created five-line stanza poem.

"Helen, thy beauty is to me
Like those Nicéan barks of yore,
That gently, o'er a perfumed sea,
The weary, way-worn wanderer bore
To his own native shore."

The World by George Herbert

And here you have "The World" by George Herbert. This poem explores mankind's spiritual journey.

"Love built a stately house; where Fortune came,
And spinning phansies, she was heard to say,
That her fine cobwebs did support the frame,
Whereas they were supported by the same:
But Wisdome quickly swept them all away."

An epic is a long and narrative poem that normally tells a story about a hero or an adventure. Epics can be presented as oral or written stories. The Iliad and The Odyssey are probably the most renowned epic poems. But, let's take a different direction and check out a sampling from Henry Wadsworth Longfellow and Ezra Pound.

The Song of Hiawatha by Henry Wadsworth Longfellow

Check out an excerpt from the epic poem, The Song of Hiawatha by Henry Wadsworth Longfellow. It illustrates different stories of the Ojibwe.

"On the shores of Gitche Gumee,
Of the shining Big-Sea-Water,
Stood Nokomis, the old woman,
Pointing with her finger westward,
O'er the water pointing westward,
To the purple clouds of sunset."

Canto I by Ezra Pound

And here's another sampling of epic poetry, this time from Canto I by Ezra Pound.

"And then went down to the ship,
Set keel to breakers, forth on the godly sea, and
We set up mast and sail on that swart ship,
Bore sheep aboard her, and our bodies also
Heavy with weeping, and winds from sternward
Bore us out onward with bellying canvas,
Circe’s this craft, the trim-coifed goddess.
Then sat we amidships, wind jamming the tiller,
Thus with stretched sail, we went over sea till day’s end.
Sun to his slumber, shadows o’er all the ocean,
Came we then to the bounds of deepest water,
To the Kimmerian lands, and peopled cities
Covered with close-webbed mist, unpierced ever
With glitter of sun-rays
Nor with stars stretched, nor looking back from heaven
Swartest night stretched over wretched men there.
The ocean flowing backward, came we then to the place
Aforesaid by Circe."

A ballad poem also tells a story, as epic poems do. However, ballad poetry is often based on a legend or a folk tale. These poems may take the form of songs, or they may contain a moral or a lesson. Enjoy some beautiful imagery in the samples.

The Mermaid by Unknown

"The Mermaid," written by an unknown author, has its roots in folklore.

The Ballad of Reading Gaol by Oscar Wilde

"The Ballad of Reading Gaol" by Oscar Wilde is another great ballad poem. This poem weaves themes of the human condition throughout it.

"He did not wear his scarlet coat,
For blood and wine are red,
And blood and wine were on his hands
When they found him with the dead,
The poor dead woman whom he loved,
And murdered in her bed.

He walked amongst the Trial Men
In a suit of shabby grey;
A cricket cap was on his head,
And his step seemed light and gay;
But I never saw a man who looked
So wistfully at the day.

I never saw a man who looked
With such a wistful eye
Upon that little tent of blue
Which prisoners call the sky,
And at every drifting cloud that went
With sails of silver by."

Also known as name poems, acrostic poems spell out names or words with the first letter in each line. While the author is doing this, they're describing someone or something they deem important. Here are two examples to illustrate the poetic form.

"Alexis" by Nicholas Gordon focuses on an intriguing woman he may or may not know.

"Alexis seems quite shy and somewhat frail,
Leaning, like a tree averse to light,
Evasively away from her delight.
X-rays, though, reveal a sylvan sprite,
Intense as a bright bird behind her veil,
Singing to the moon throughout the night."

A Cry For Help by Samar Alkhudairi

"A Cry For Help" by 12-year-old Samar Alkhudairi is an example of an acrostic poem that tackles the tough issue of bullying.

"Brutal beatings beyond the feeling of pain
Understanding this hurt might get me closer to being sane
Love is a myth
Life has become like a work of Stephen King
You don't know what it's like
I am treated like just some 'thing'
Never to be kissed, comforted, or loved
Going the rest of my life never to be hugged"

Although William Shakespeare sensationalized sonnets, the word sonetto is actually Italian for "a little sound or song." This form has grabbed poets by the heart for centuries. It began as a 14-line poem written in iambic pentameter. Although flourishes have been made over time, the general principle remains the same. Read up on sonnet examples to learn more about the different types of sonnets. In the meantime, let's enjoy two great samples.

Sonnet 116: Let me not to the marriage of true minds by William Shakespeare

This sample, "Sonnet 116," is from the master himself, William Shakespeare. As with many of Shakespeare's sonnets, it's dripping in feelings of love.

"Let me not to the marriage of true minds
Admit impediments. Love is not love
Which alters when it alteration finds,
Or bends with the remover to remove.
O no! it is an ever-fixed mark
That looks on tempests and is never shaken;
It is the star to every wand'ring bark,
Whose worth's unknown, although his height be taken.
Love's not Time's fool, though rosy lips and cheeks
Within his bending sickle's compass come;
Love alters not with his brief hours and weeks,
But bears it out even to the edge of doom.
If this be error and upon me prov'd,
I never writ, nor no man ever lov'd."

Ever by Meghan O'Rourke

"Ever" by Meghan O'Rourke is a more modern sample, published in 2015.

Even now I can’t grasp 'nothing' or 'never.'
They’re unholdable, unglobable, no map to nothing.
Never? Never ever again to see you?
An error, I aver. You’re never nothing,
because nothing’s not a thing.
I know death is absolute, forever,
the guillotine—gutting—never to which we never say goodbye.
But even as I think 'forever' it goes 'ever'
and 'ever' and 'ever.' Ever after.
I’m a thing that keeps on thinking. So I never see you
is not a thing or think my mouth can ever. Aver:
You’re not 'nothing.' But neither are you something.
Will I ever really get never?
You’re gone. Nothing, never—ever."

Fill Your Canvas With Words

That's all poetry is. Some people paint with paintbrushes. Others fill pages with words that evoke colorful images. If you suspect you have a knack for poetic storytelling, then the gift is already inside you. Study each of these seven types. See which one feels closest to your heart. Then, when you're ready to start writing, review these tips and go on out there and paint your canvas.