If you get a warning for a severe storm coming your way, you don't take the time to wonder whether it's a hurricane or a typhoon. But it's still important to know the difference between these terms as a reader, writer and safety-conscious person. Keep reading to learn when you should use typhoon vs. hurricane to describe a tropical storm. 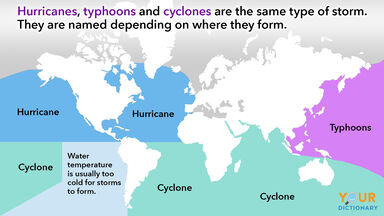 Typhoons and Hurricanes Are Both Cyclones

Both typhoons and hurricanes are types of tropical cyclones, which are different from tornadoes. Meteorologists define cyclones as an organized system of clouds and winds that are rotating inwards toward low atmospheric pressure, known as the "eye of the storm." Cyclones occur over tropical waters around the world.

From Storm to Cyclone

Tropical storm systems with low atmospheric pressure (known as atmospheric depression) become cyclones when they create a closed rotation pattern. The progression of storm classification is:

Once a storm's winds reach 74 miles per hour, it is classified as a typhoon or a hurricane. But what's the difference between hurricane vs. typhoon?

The Difference Depends on Location

The only detail that matters when calling a storm system a typhoon vs. hurricane is where it occurs. A storm known as a typhoon would be called a hurricane in another part of the world.

You may be more familiar with the term typhoon if you live in Asia or an Oceanic country. Tropical cyclones that occur in the west or northwest areas of the Pacific Ocean, specifically in East Asia and north of Australia, are called typhoons.

Typhoons and hurricanes also have different ways of rating the intensity of a storm system. This allows authorities to issue the proper warnings and evacuation orders to people who may be affected by tropical cyclones.

The CMA and the PAGASA also use three rating categories:

Most countries that monitor hurricanes refer to the Saffir-Simpson Hurricane Wind Scale. It groups hurricanes into five categories based on their sustained wind speeds. The categories are:

Category 1 hurricanes are roughly equivalent to typhoons in the first rating. Category 2 hurricanes would be the same as Very Strong or Severe Typhoons, while Category 3, 4 and 5 hurricanes (known as major hurricanes) are equivalent to Violent or Super Typhoons.

Word Origins of Typhoon and Hurricane

So if the words mean the exact same thing, why do we use both? The answer comes in the words' origins, which are specific to their regions. The word cyclone comes from the Greek kyklon, meaning "moving in a circle."

The origins of typhoon and hurricane are:

These climate words originate from the belief systems and observations of native people. They were then translated or adapted into the languages of European explorers as they observed these monstrous cyclones.

The Future of Tropical Storms

Knowing the difference between typhoon vs. hurricane is helpful when studying or writing about cyclical storm systems. However, it's also important to know more about how they start — and why they seem to be increasing in intensity and frequency. Take a look at the impact and possibilities of climate change with these examples of global warming.