Verb Phrase Examples and How to Spot Them

A verb phrase is the portion of a sentence that contains both the verb and either a direct or indirect object (the verb's dependents). Take a look at what verb phrases are, and then view some verb phrase examples. 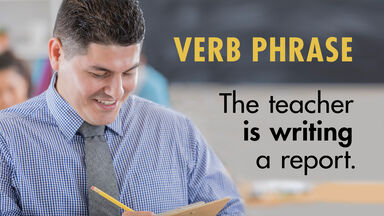 Verbs are words that demonstrate an action, such as sing, dance, smell, talk, and eat. When combined with linking verbs, such as is, must, will, and has, they form verb phrases. Verb phrases can consist of one to three linking verbs, and action verbs, and sometimes any complements (such as objects or direct objects).

Verb phrases form tenses besides present and past tense, including progressive tenses and perfect tenses. They also demonstrate the sentence’s mood, intention and other information.

A verb phrase can be the predicate of the clause or sentence. It functions as the verb in a sentence, even when it has more than one word.

Verb phrases help to make your text more informative and meaningful. They are essential to clear writing and letting your reader know exactly what you’re trying to say.

When verb phrases function as anything other than verbs, they’re verbal phrases. Verbal phrases can act like adverbs or adjectives. The phrase would include the verbal (participle, gerund or infinitive) and any modifiers, complements or objects.

Examples of verb phrases versus verbal phrases include:

All of these different verbal phrases provide important useful information for the reader about the action in the sentence. However, they do not function as the action in your sentence. That’s the verb and verb phrase’s job!

Make Your Verbs Work for You

Verb phrases are great additions to sentences when you need to make your action more precise. Once you’ve mastered verb phrases in your grammar journey, try out more complicated verb forms. A list of phrasal verbs is helpful for both native and non-native speakers who have a harder time sorting out these specific verb forms.