Have you ever read an excerpt from a book or poem and felt like you were standing in a flower-filled meadow or tip-toeing through a shadowy alleyway? Visual imagery appeals to the sense of sight and plays a large role in descriptive writing.

When used well, visual imagery can transport readers to a 15th-century castle in Italy or a bumpy road in Ireland, riddled with puddles and sheep. Being able to describe a scene is one of the most important elements of creative writing. Below, we’ll explore ten visual imagery examples to help you get your creative juices flowing. 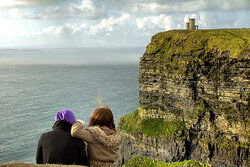 Put on your sunglasses. We’re about to go on a sensory ride including bright bursts of sunlight, the verdant glades of Scotland, and delicate slips of moonlight through frost-covered glass.

As we write, there are a multitude of ways to draw the reader into the story. We can catch their attention with an interesting bout of alliteration. Or, we can insert onomatopoeia to mimic the “splash” of water or the “kerplunk” of a log. These are two examples in a robust world of literary devices. For more on these, take a read through these Examples of Rhetorical Devices.

Why Do Writers Use It?

Famed romance writer, Nora Roberts, has a blog titled “Fall Into The Story.” Welcoming readers into a new world should be the goal of every creative writer. Readers enjoy being able to step out of their everyday lives and into new adventures. One of the most common ways to do this is through visual imagery.

With this tool, readers can use their imagination to sit before a peat fire in Ireland or zipline through the lush, green forest in Chile. They’ll know if the hot, scorching sun was burning their eyes or the hot, invisible sun was hiding behind the clouds.

All in all, there are five types of imagery in literature. They are:

For a deeper dive, enjoy What Are the 5 Types of Imagery in Literature?

Do you always have a story running through your head? When you go out to a restaurant, do you like to make up stories about the other people sitting around you? Is the old man dining alone mourning the loss of his wife? Is the couple staring at their cell phones on the brink of a divorce? Perhaps you have a future in storytelling.

One night, open up a blank Word doc and write a scene - just one scene. Try to paint a vivid image with your words, whether it’s a cluttered kitchen or an empty warehouse. And when you’re ready to create an entirely new world, take a look at Get Creative: How to Write a Short Story. We hope you’ll set the world on fire with your visual imagery and powerful attention to detail.