The early days of American history began with the original 13 colonies on the East Coast followed by the American Revolution, then the birth of a new country, the United States of America, in 1776. During the mid-1800s, the country began expanding westward. Explore key events in the westward expansion timeline to get a sense of how this era unfolded, along with a visual timeline highlighting key events. 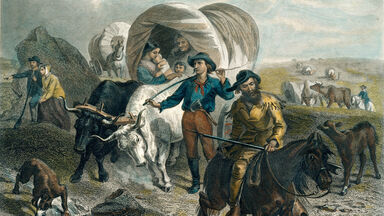 When Was the Westward Expansion?

The westward expansion of the United States took place during the 19th century, starting in 1803 with the Louisiana Purchase and ending in 1890 when the U.S. Census superintendent formally announced that the country's frontier had been settled.

The size of the United States instantly doubled when then-president Thomas Jefferson completed the Louisiana Purchase, buying a massive territory (around 827,000 acres) west of the Mississippi River from the French for $15 million. This transaction included the land that now makes up the states of Louisiana, Arkansas, Iowa, Missouri, Nebraska, North Dakota, Oklahoma, and South Dakota, along with the majority of the land in Colorado, Kansas, Minnesota, Montana, and Wyoming.

In 1805, President Jefferson sent explorers Meriwether Lewis and Willam Clark, commonly known as Lewis & Clark, to explore the area west of the Mississippi River. They started with the area included in the Louisiana purchase, then went further west. They began in St. Louis, eventually making their way to the Pacific Ocean, crafting detailed maps along the way. In 1806, they returned to where their journey started, then reported the findings of their expedition.

1843: Great Migration via the Oregon Trail

In 1843, close to 1,000 people joined together to traverse the Oregon Trail via a wagon train, a feat that required going over the treacherous Rocky Mountains. They began in Independence, Missouri and made it all the way to Oregon Country, which still belonged to England. Their approximately 2,000-mile journey was a success, a fact that surprised many people who did not think the group would be able to safely navigate the long journey. They settled the area and were followed by thousands more over the next few years.

Texas officially became a state in 1845. In 1844, the Republic of Texas entered into a Treaty of Annexation with the United States, laying the groundwork for statehood. In 1845, Congress passed a joint resolution in favor of annexing Texas, which was approved by voters in the then-republic, now state.

Fleeing violence and religious persecution, the Mormons left their settlement in Illinois and headed west in search of a new homeland. Under the leadership of Brigham Young, they traversed more than 1,300 miles west through the wilderness, crossing the Rocky Mountains and stopping in what is now Utah. Seeking an isolated place to call home, they opted to stop in the Great Salt Lake Valley, which they decided would be their promised land. By the end of the year, around 2,000 Mormons had settled in the area.

Gold was discovered in Northern California, spurring thousands of people to find their way to the west coast in search of riches. Prior to the gold rush, fewer than 1,000 people lived in California. So many people flocked to the area that there were around 100,000 people there by the time 1849 drew to a close. The gold rush continued, peaking in 1852 then declining until it ended in 1857.

California officially became a state in 1850, just two years after being ceded to the United States by Mexico via the Treaty of Guadalupe Hidalgo. Unlike other states in the west, California was granted statehood without first having been a territory.

With the passing of the Homestead Act of 1862, people were eligible to claim up to 160 acres of land in the west. After residing on the land for five years and making improvements at that time, the land would be given to those who settled it. Many people rushed west to claim their land and establish a homestead. Approximately 500 million acres were assigned to those who made claims under this law between 1862 and 1904. About 80 million of those acres went to homesteaders; the rest went to business interests such as cattlemen, timbermen, railroads, miners, and speculators.

Colonel George Armstrong Custer led an 1874 expedition on which gold was discovered in the Black Hills of the part of the Dakota Territory that is now South Dakota. This spurred a brand new gold rush, drawing speculators seeking to strike it rich to settle in the area. Within two years, nearly 10,000 people had relocated to the area on a quest for gold.

The Dakota Territory was split into two parts in 1889. Both North Dakota and South Dakota became states in 1889. A vast area, this part of the country was among the last places to be settled before the westward expansion timeline drew to a close.

1890: America Declared to Be Settled

Looking for a quick way to visualize what took place during the western timeline? Take a look at the visual timeline below.

Now that you're familiar with some of the key events that took place during the western expansion timeline of the United States, take the time to learn more about American history. Start by exploring some famous American symbols and what they mean. Then, explore a list of state capitals and interesting facts about them. You'll be on your way to building a solid foundational understanding of the past and present of the United States of America.