What Are the 5 Pillars of Islam? Core Beliefs and Practices

You might be wondering, "What are the 5 pillars of Islam?" Well, you've come to the right place. The 5 pillars are the specific tenets that Islam requires each Muslim to follow. Discover the core beliefs and practices of Islam. 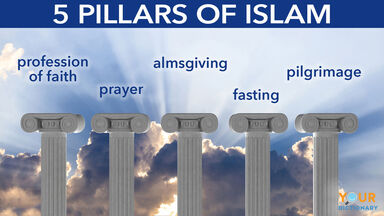 The 5 Pillars of Islam

Every religion has specific tenets that are important to the faith. For example, devotion and prayer are important tenets of the Christian faith. The religion of Islam has five pillars. These pillars are core to the practice of Islam. What are the five pillars? They include the profession of faith (belief), prayer, almsgiving, fasting, and pilgrimage. Check out each of these pillars in more detail.

Several religions require you to commit yourself to God. In Islam, this is called the profession of faith or the shahada. During this pillar, the believer commits themself to the religion through the Arab phrase,

“There is no god but God and that Muhammad is His messenger.”

In addition to being inscribed on the Quran and mosques, the shahada is in the ritual prayer, and reciting the shahada is a required part of joining the faith.

Prayer is pivotal to the Islamic faith. The daily prayer, salat, is performed 5 times a day to show devotion to Allah. Prayers must be in the direction of Mecca, include standing and bowing, and are performed at specific times: dawn, noon, midday, sunset, and evening. While mosques are typically full at these times for prayers, you don’t have to pray at a mosque. Daily prayers can be completed at home as long as the prayer is done in the direction of Mecca. Fridays involve a special congregational prayer for male followers known as jum’a; however, many mosques also allow women to attend.

The ritual prayer can vary but here is a common example:

In Islam, community and giving are key concepts. Therefore, every member is required to zakat. This means that members share a portion, at least 2.5% a year, of their wealth to charities. The money could be given to needy members of the community or to other forms of charity like building mosques, hospitals, libraries, soup kitchens, and schools. The giving of water through public drinking fountains is also popular.

Fasting, or sawm, isn’t done all the time but is done during Ramadan. Ramadan is a time of spiritual reflection during the Islamic calendar’s ninth month. During this fast, healthy adults refrain from eating food or drinking during the daylight hours. The deprivation is important to illustrate the blessings God provides, build a closer relationship with the poor and needy, and develop self-control.

Last, but certainly not least, is the pilgrimage, hajj, that Muslims take to Mecca. The religion doesn’t require this yearly or anything but would like Muslims to visit Mecca and holy sites at least once in their lifetime. Spiritual and physical health are considered before taking the trip because rituals and actions are completed during the trip. For example, they wear special garments and attend ceremonies requiring walking long distances. The twelfth month of the Islamic calendar is the designated time for the pilgrimage to Mecca.

Understanding the 5 Pillars of Islam

When it comes to the 5 pillars of Islam, each pillar is equally important. However, emphasis is put more on some pillars than others because they are completed daily. However, they are all core to the Islamic religion. Learn more about religions by exploring the 5 main world religions. Then focus on learning the differences between Judaism and Christianity.