What Are the 5 Themes of Geography? Simple Examples

Geography is a huge subject. Since teaching such an expansive topic can be overwhelming, the topic is organized under five separate themes. Discover what are the 5 themes of geography, and use them as a tool to help effectively structure and organize your approach to teaching geography. 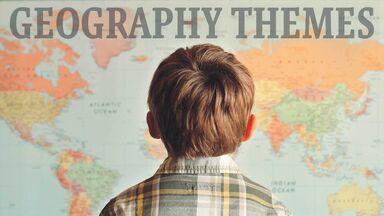 These examples hold true for any place, from your home to your school to your favorite places to visit and beyond.

The relative location of a place changes based on how its location is being described in terms of its relative position to another location.

In terms of geography theme, place refers to the physical and/or human characteristics that make up a location.

Physical place is represented by the physical features of a location.

The human characteristics of place refer to cultural features introduced and maintained by humans.

Human-environment interaction as a geography theme refers to the connections and interactions between human beings and the overall environment.

Examples of human-environment interaction include:

In terms of geography theme, movement refers to interactions between places due to people's movements from one place to another.

Some examples of movement are:

In terms of geography theme, a region is an area that shares certain common geographic characteristics.

Examples of regions include:

Geography is a fascinating subject that can be explored from many angles, though it's most often organized in the context of the five themes discussed here. If learning about the five themes of geography has piqued your interest, continue learning even more. Start by building a strong vocabulary of geography terms.