What Are the Different Types of Numbers in Math?

What is a number? The answer to that question might seem obvious, but there are actually different types of numbers. Expand your mathematical horizons by learning about the various kinds of numbers. 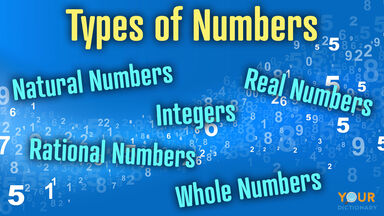 Any figure or symbol that is used to indicate a number is a numeral. Every way a number can be written, whether you're writing a small number or a large number, is an example of a numeral. This is true whether you are using standard Arabic numerals (0-9) in any combination or if you are using Roman numerals.

Natural numbers are the most basic type of number. They are generally the first numbers that students learn. These are referred to as the counting numbers, which means they can be used to count objects or items. They start with the number 1 and increase from there (1, 2, 3, 4, 5, and so on).

Negative numbers are values that are less than zero. They are the opposite of natural numbers (counting numbers). The first negative number is -1, with the rest of the numbers following in sequence (-1, -2, -3, -4, -5 ...).

What is an integer? An integer is any number that does not include a fractional component. This type of number includes all of the whole numbers (which represent all of the natural numbers and zero) as well as all of the negative numbers. A string of integers could include -3, -2, -1, 0, 1, 2, 3, and so on. There isn't a maximum or a minimum; this can continue infinitely.

A fraction is a number that represents parts of a whole. For example, the fraction 1/2 means that you are looking at one portion of something made up of two pieces. Fractions consist of two numbers, a numerator and a denominator. The numerator is the top number; it represents the part that is present. The denominator is the bottom number; it stands for the total number of parts. If a pie is cut into 8 pieces and you eat 1 of them, that would mean that you have eaten 1/8 of the pie.

Irrational numbers are ones that cannot be expressed as a ratio of two integers. For example, pi, which represents the ratio of the circumference of a circle in relation to its diameter, is an example of an irrational number. So are all square roots, with the exception of square roots of perfect squares. Such values cannot be arrived at simply by dividing two integers. Thus, they are irrational.

Real numbers are sometimes referred to as measuring numbers. That's because each real number corresponds to a point on a measuring line. This category of numbers includes both rational and irrational numbers. Zero is particularly unique because it is a real number and an imaginary number.

While the concept of numbers might seem really basic at first glance, reviewing the different types of numbers reveals that they are quite complex. Now that you're familiar with various kinds of numbers, it's a great time to go ahead and deepen your math vocabulary. Start by mastering the meaning of basic math terms. Then explore the basic rules of positive and negative numbers. From there, learn what the acronym PEMDAS stands for and how it can help you solve equations.