Poems are collections of words that express an idea or emotion that often use imagery and metaphor. As you are studying literature, you will likely notice that poems come in many, many different forms. Explore definitions and famous examples of several different types of poems. See excerpts of poems from famous poets around the world. 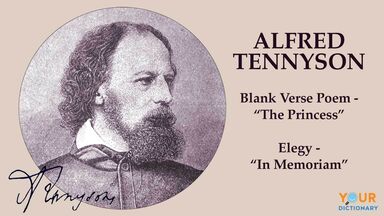 Types of Poems With Examples

There are a lot of poets out there. However, a few names have become synonymous with spectacular work, like William Shakespeare. Explore different types of poems by famous poets.

Elegy: In Memoriam by Alfred Tennyson

Alfred Tennyson's "In Memoriam" is an elegy to a close friend, Arthur Henry Hallam, and was written over 20 years. Elegies express a lament, often over the death of a loved one. Watch this in action in this excerpt.

"Strong Son of God, immortal Love,
Whom we, that have not seen thy face,
By faith, and faith alone, embrace,
Believing where we cannot prove;
Thine are these orbs of light and shade;
Thou madest Life in man and brute;
Thou madest Death; and lo, thy foot
Is on the skull which thou hast made."

William Carlos Williams' short poem "The Red Wheelbarrow" is a famous example of a short imagery poem. These types of poems work to draw a picture in the mind of the reader, in order to give an extremely powerful image of what the writer is talking about. They can also intensify the senses of the reader.

"so much depends
upon

beside the white
chickens."

Limerick: There was a Young Lady of Dorking by Edward Lear

A limerick is a poem that is often silly or whimsical, written in five lines with an AABBA rhyme scheme. Often, limericks tell a short, humorous story. The form of the limerick was made popular by a British poet named Edward Lear in the 1800s. Explore a limerick in action through “There was a Young Lady of Dorking.”

"There was a Young Lady of Dorking,
Who bought a large bonnet for walking;
But its colour and size,
So bedazzled her eyes,
That she very soon went back to Dorking."

Pastoral: Ode on a Grecian Urn by John Keats

One of the poetic favorites is pastoral poetry because it elicits such wonderful senses of peace and harmony. Examples of this form include Keats' "Ode on a Grecian Urn," which is also a type of ode. In general, pastoral poetry will focus on describing a rural place, but the terms will be peaceful and endearing. You will feel at ease after reading these types of poems.

"Thou still unravish'd bride of quietness,
Thou foster-child of Silence and slow Time,
Sylvan historian, who canst thus express
A flowery tale more sweetly than our rhyme:
What leaf-fringed legend haunts about thy shape
Of deities or mortals, or of both,
In Tempe or the dales of Arcady?
What men or gods are these? What maidens loth?
What mad pursuit? What struggle to escape?
What pipes and timbrels? What wild ecstasy?"

Epitaph: Upon a Child That Died by Robert Herrick

An epitaph poem is typically a short poem of remembrance typically used on a tombstone of a loved one. See this epitaph by Robert Herrick about a child.

"Here she lies, a pretty bud,
Lately made of flesh and blood,
Who as soon fell fast asleep
As her little eyes did peep.
Give her strewings, but not stir
The earth that lightly covers her."

The Italian poet Dante created the terza rima, and his Divine Comedy is one of the best-known examples of the form. See how a terza rima works through this famous poem.

"His glory, by whose might all things are mov'd,
Pierces the universe, and in one part
Sheds more resplendence, elsewhere less. In heav'n,
That largeliest of his light partakes, was I,
Witness of things, which to relate again
Surpasseth power of him who comes from thence;
For that, so near approaching its desire
Our intellect is to such depth absorb'd,
That memory cannot follow. Nathless all,
That in my thoughts I of that sacred realm
Could store, shall now be matter of my song."

Reading and understanding these types of poems examples should help you better analyze the poetry that you come across, as will some essential poetry terms. They may even inspire you to write your own.