What Are Examples of Civil Rights?

Civil rights allow people to live freely within a democracy. The different types of civil rights guarantee equal opportunities, legal protections, and the ability to participate in society without persecution. Without civil rights, individuals have no legal safeguard against discrimination or wrongful imprisonment. 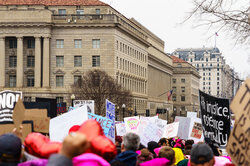 Civil rights ensure that no person in a democracy is treated unequally. Although civil rights apply to all citizens, they specifically protect those who are particularly at risk for unfair treatment. You cannot be discriminated against based on:

Civil rights for protected groups are upheld and regulated with legislation. Examples of American federal legislation that protects civil rights include the Americans with Disabilities Act (ADA), the Fair Housing Act (FHA), and the Civil Rights Act of 1964.

It is illegal to discriminate against someone in a protected class. Most civil rights violations occur in public sectors, such as government or public schools, or in employment situations for companies with more than 15 employees.

Here are some examples of situations in which your civil rights are supposed to protect you.

While civil rights regulate the way a government must protect you from discrimination, civil liberties detail the freedoms to which you are entitled in a democracy. Examples of civil liberties include:

The United States outlines its civil liberties in its Bill of Rights, and institutions like the ACLU ensure that these liberties remain intact. Countries like Japan, Germany, and Australia have similar liberties included in their constitutions.

Political rights are a form of civil rights. They are afforded to citizens specifically when they participate in politics or government institutions. These rights include:

Many of these rights are covered in a country’s civil liberties. Regardless, it’s important to know your rights when it comes to governmental processes. Explore more about political rights, such as the right to vote, with a timeline of the women's suffrage movement.

Civil rights may be guaranteed on paper. But, it takes raising awareness about civil rights issues and actual action taken by citizens to ensure that civil rights are protected.

Led by Dr. Martin Luther King, Jr., participants in the Civil Rights Movement protested against racial discrimination of African-American citizens in the 1950s and 1960s. These violations included segregation in public spaces, restrictive voting conditions, and unfair hiring practices. The influential movement resulted in important civil rights legislation that protects all citizens to this day.

The Anti-Apartheid Movement in South Africa

Apartheid in South Africa lasted from 1948 to 1991. It divided citizens into four racial groups – White, African, Indian, and Coloured – and enforced severe racial segregation between them. Resistance against apartheid continued throughout its 43-year implementation and included leaders Desmond Tutu and Nelson Mandela.

International objection to apartheid pressured the South African government to dismantle the system in the early 1990s. After spending 27 years in prison for civil rights activism, Nelson Mandela was elected as South Africa’s first democratic president in 1994.

The period known as “the Troubles” in Northern Ireland began with a civil rights movement in 1967. The Northern Ireland Civil Rights Association sought to protest discrimination against Catholics, end unequal plural voting, and to form a unified Ireland.

The once-peaceful movement escalated into violent conflicts over the next decade as authorities attempted to suppress the protests. The Troubles ended with the Northern Ireland peace process in 1998, resulting in a focus on civil and human rights in the Good Friday Agreement.

Civil Rights in the Soviet Union and Russia

During the Cold War, civil and human rights activists in the Soviet Union fought against punitive psychiatry, inhumane treatment of prisoners, and the persecution of speech and press. Groups like the Committee on Human Rights in the USSR secretly documented political mistreatment and risked imprisonment in labor camps by participating in illegal political demonstrations.

The 1975 Helsinki Accords, also called the Helsinki Final Act, reduced tension between the United States and the USSR. It also included both civil and human rights clauses for Soviet citizens. However, watchdog groups are concerned that the Russian government continues to violate civil rights, particularly the rights of LGBTQ+ citizens.

Now that you know about your civil rights, learn more about global human rights or rights-based ethics and the difference between equality and equity. Then, explore what natural rights are. You can also check out a thoughtful look at how Martin Luther King, Jr. and his vision changed the world, and find opportunities to support populations around the world.