What Are Examples of Felonies and Misdemeanors?

So, what are examples of felonies and misdemeanors? Unfortunately, the answer to that is not so cut and dry. A crime can have the same general classification but be broken down into several levels of severity, some of which may raise the seriousness from a misdemeanor to a felony. Let’s take a closer look. 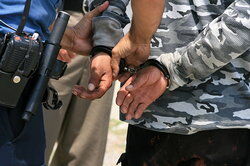 Image of a man being arrested
Advertisement

A good example of multiple levels of severity is the general class of crime called assault. In the case of assault, threatening to cause harm to a person but not carrying through on the threat would be classified as a misdemeanor. This can carry jail time of six months to a year.

Assault that resulted in actual bodily injury, or in which a weapon was used as part of the assault, would be considered a felony. Felony assault comes with anywhere from one year to 25 years in prison.

Disturbing the peace is another common charge. This charge comes in many forms, including fighting in a public place, bullying others, or mobilizing an unlawful public assembly.

Disturbing the peace, also known as a break of peace, is almost always classified as a misdemeanor. Felony counts are rare, but possible, depending on the state and circumstances surrounding the crime. Given the many variations of this crime, jail time can also vary. The maximum penalty, however, is one year in jail.

Crimes relating to drugs can also be classified as misdemeanors or felonies. Misdemeanors usually pertain to simple drug possession charges. Things advance to felonies when they involve more than simple possession. This can include possession of a large quantity of drugs or an intent to sell.

The quantity required to progress from a misdemeanor to a felony varies from state to state. In California, for example, one can face a year in jail for simple possession, as well as notable fines. If, however, you’re found with a large quantity or deemed to have an intent to sell, one can face multiple years in state or federal prison.

Theft is another great example of a crime that has differing levels of severity. Petty theft is the unlawful taking of property or money from another person without their consent. The distinction between whether theft is a misdemeanor or a felony is dependent on the value of the cash or property stolen.

Many states classify theft of up to $500 as a misdemeanor and theft of larger amounts as a felony. If convicted of a misdemeanor, possible jail time can include one year behind bars. Felony theft is also referred to as larceny.

Grand larceny, or grand theft, may also be on the table if the theft exceeds a value of $1,000 or more. Grand larceny is a felony. You may have heard of “grand theft auto” in reference to stealing a car.

Other crimes are distinguished as being misdemeanors or felonies depending on against whom the crime is committed. Indecent exposure falls into this category. Exposing one's private parts in public in such a way as to alarm others is considered to be a misdemeanor.

However, if the exposure is before a child, then the crime rises to the level of a felony. Different states set different age limits as to where the line exists between misdemeanor and felony indecent exposure. In California, whether someone’s charged with a misdeameanor or a felony, they will be labeled as a sex offender for the rest of their lives.

Felony traffic violations include leaving the scene of an accident and vehicular homicide. These violations can come with anywhere from one year to life in prison.

Another potential felony traffic infraction is repeated DUIs. In this case, many states upgrade repeated charges of DUI from misdemeanor to felony status. While the criminal act being committed is the same, multiple violations can result in a felony charge that carries harsher punishments.

Jail Time for Misdemeanors Versus Felonies

The primary difference between misdemeanors and felonies is the amount of jail or prison time that a convicted offender can be sentenced to serve. Many felonies are also broken down into classifications, or levels of seriousness, according to what punishments may be imposed.

Felonies that are broken down into these differing classifications include:

These felonies can be classified from Class E or F felonies, such as the lowest levels of theft, up to Class A felonies, which carry a life's sentence in prison or the death penalty. Class A felonies are generally murder or first degree intentional homicide.

The classification of misdemeanors and felonies is based legally on the severity of punishment; the most severe of punishments are reserved for the most serious offense.

Traffic violations, trespassing, petty theft, and similar offenses are misdemeanors and depending on the state, carry maximum jail times of between 6 months and one year. The attendant fines are also limited to relatively small amounts of money, generally $1,000 to $2,000 maximum.

Felonies such as murder, rape, arson and kidnapping are substantially more serious and all carry jail times of at least one year and in most cases, substantially greater terms of incarceration. At the most severe level of felony classification, Class A, the maximum penalty can be life in prison without parole or the death penalty.

A Life Without Crime

As you can see, the legal system varies from state to state and situation to situation. Some crimes come with public service, others come with multiple decades in federal prison. And sometimes, even an accessory or accomplice to the crime can be charged. It’s best to live an honest life, free from any sort of crime.

If, however, you’d like to dive into a fictional world of crime and litigation, then perhaps you should consider writing a novel! For more on that, enjoy these Tips on Writing a Bestseller. Better yet, start small with these tips on how to write a short story.