What are Examples of Geometric Shapes in Real Life? 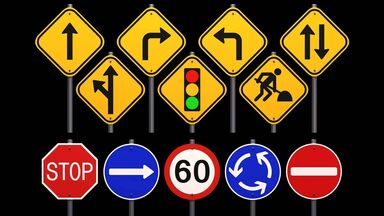 Two-dimensional shapes are flat figures that have width and height, but no depth. Circles, squares, triangles, and rectangles are all types of 2D geometric shapes. Check out a list of different 2D geometric shapes, along with a description and examples of where you can spot them in everyday life.

Keep in mind that these shapes are all flat figures without depth. That means you can take a picture of these items and you can still determine their shape. The same isn't true for three-dimensional shapes.

A circle is a round shape with the same radius from a fixed point in the center. Examples of circles in real life include:

Triangles are three-sided figures with straight sides. There are lots of different types of triangles, depending on their angles. Examples of triangles in real life are:

Like a square, a rectangle has four straight sides with four right angles. However, two sides are shorter than the other two sides. Check out these examples of real-life rectangles:

Pentagons are shapes with five sides of equal length. They are less common than quadrilaterals, which have four sides, but can still be found in real life. Some examples of pentagons are:

When you add one side to a pentagon, you get a hexagon. A hexagon has six straight sides of equal length. Check out these examples of real-life hexagons:

Eight straight sides, typically of equal length, make an octagon. They are more common in real life than you may think. Some examples of octagons are:

A trapezoid is a four-sided figure with just one pair of parallel sides. You can find trapezoids in the following examples:

Some of these shapes are interchangeable, of course. For example, a bag might not always be a parallelogram, as there are certainly circular bags and other types possible. This list is also not exhaustive either, as there are many other two-dimensional and three-dimensional geometric shapes.

Each of the six faces of a cube is a square. When they are put together in a 3D cube shape, also known as a square prism, they create depth. Some examples of cubes include:

A cone has a circular base that tapers to one point. Cones are very common in everyday items, including:

Cylinders are three-dimensional figures with parallel sides and a circular cross-section. Some real-life examples of cylinders are:

An ellipsoid is a sphere that is not perfectly round because it has been flattened at two sides. Also known as a spheroid, an ellipsoid creates a 3D oval effect. Some examples of ellipsoids are:

A rectangular prism is a 3D figure where one pair of opposite sides are the same shape, connected by straight, parallel sides. They have four rectangular faces and two square faces. You can find rectangular prisms in these examples:

A three-dimensional figure with one flat side and edges emerging to come together at a point is a pyramid. They can have any shape with three or more sides as their base, including a triangle (triangular pyramid), square (square pyramid) and pentagon (pentagonal pyramid). Examples include:

Shapes That Build Our World

The world around us is built out of 2D and 3D shapes. Having a basic understanding of geometric shapes and where they can be found in everyday life is a great start to a mathematical education. For more mathematical practice, check out these basic math terms to get you started. You can also take a look at some examples of monomials and polynomials if you're ready to move on to algebraic concepts.