What Are Natural Rights? The Concept and Key Examples 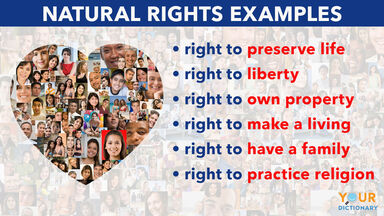 What Is the Definition of Natural Rights?

Natural rights refer to the rights given to all humans, simply for the sake of being human. They are universal moral principles among all cultures and societies and can't be reversed by government laws. For this reason, natural rights are often called inalienable rights — rights that cannot be taken away. Natural rights are the basis of a social contract in society. They would exist even if the government didn't exist.

What are natural rights examples in your daily life? John Locke believed that the most basic and essential natural right is the preservation of mankind — that is, the right to life. He also wrote of "liberty and estate (property)." Thomas Jefferson famously summed up Locke's views in the preamble of the Declaration of Independence. Take a look at some natural rights examples and what they really mean.

The Right to Preserve Life

All humans have the right to stay alive, and no government can ever take that right away. This right extends to the right to defend yourself against people who cause you harm. Most philosophers agree that the right to life is the most fundamental natural right.

The Right to Liberty

Humans have the right to a free life. They have freedom of movement (which is freedom from unlawful detainment) and freedom of thought. Some believe that the right to privacy falls into the natural right of personal liberty.

The Right to Own Property

The Right to Make a Living

Humans have the right to earn money in order to make a living. Thomas Jefferson summarized this right as "the pursuit of happiness." This right reflects one's right to economic liberty; the government cannot stop a person from making a living.

The Right to Have a Family

All people have the right to marry and to have a family. Aquinas wrote extensively of this view, which maintains that one has a natural right to marry as a reflection of their natural liberty. They may also have children without the consent of the government or state.

The Right to Practice Religion

Everyone has the right to form and practice a relationship with the religion of their choice. The right to religion is reflected in both Aquinas' writing and in the United States Bill of Rights. Aquinas wrote of the right to know God, while the Bill of Rights clarifies that Americans have freedom of religion without government intervention.

Civil rights are rights given to individuals by societies. They are established and enforced by law. Natural rights exist even if a society falls apart, but civil rights would disappear without someone to enforce them. Civil rights protect individuals from discrimination based on their race, sex, age, disability, sexual orientation, religion, or any other protected class. Civil liberties, like those outlined in the Bill of Rights (such as Freedom of the Press and Freedom of Speech), apply legal protection to natural rights to freedom, but again, they would cease to exist without a government to enforce them.

No king, president, congressional body, or ruling power can take your natural rights away. Most modern democracies have provisions in their constitutions to protect these rights, just like the United States Constitution. Learn more about how natural rights become civil liberties with these examples of civil disobedience in history.