What Are Term Limits in the US Government?

Term limits for different positions in the U.S. government ensure the government remains a democracy. Government officials are typically chosen through elections but may be limited in the number of times they can be elected. Explore which positions have term limits and which don’t. 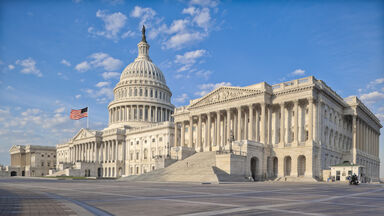 US Capitol with Senate Chamber in foreground
Advertisement

A term limit is a “legal restriction that limits the number of terms a person may serve in a particular elected office.” Some federal term limits are written in the U.S. Constitution, while others are not formally addressed.

The 22nd Amendment of the United States Constitution was ratified in 1951 and sets how many terms a U.S. President can serve. Prior to 1951, there were no term limits for U.S. Presidents. However, many Presidents, including George Washington, subscribed to an unwritten rule that a President should only serve two terms.

U.S. Supreme Court Justices are nominated by the U.S. President and confirmed by a U.S. Senate vote. The U.S. Constitution only says that Justices “hold their offices during good behavior,” which has been interpreted to mean they serve until they decide to leave or are impeached.

The average length of time served for U.S. Supreme Court Justices is 16 years. Justice William O. Douglas served the longest term, staying with the court for just over 34 years.

Each U.S. Senator term lasts six years, and elections are staggered across even years. There is currently no limit to how many terms a U.S. Senator can serve.

US House of Representatives Term Limits

Article One of the U.S. Constitution describes how long terms for the Senate and the House of Representatives, collectively known as Congress, will be along with how elections should be held and the duties of these positions. It does not designate how many times a congressman or congresswoman can be elected.

In 1995, the U.S. Supreme Court ruled that individual states do not have the authority to set term limits for their U.S. Representatives or Senators.

State term limits for government positions are designated by each state and vary by state.

How many terms a governor can serve depends on the state they govern. Currently, 36 U.S. States have term limits for their governors. A governor’s term is four years in all but two states. In New Hampshire and Vermont, each term is two years.

The most common gubernatorial term limit is the 2-consecutive terms limit where a governor can’t hold the position more than two times.

Term limits for U.S. government positions have changed throughout history and could continue to change in the future. Learn more about things like the separation of powers to see where you stand on term limits.