What Are the 7 Different Types of Pollution?

You hear about pollution all the time. It could be the smog in your city or the trash covering your beach. Learn what pollution is, how it’s caused, and the 7 types of pollution. 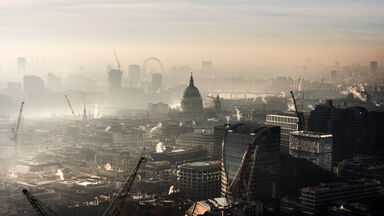 When it comes to pollution, there isn’t just one cause. There are lots of them. However, before we can break down what causes pollution and the types of pollution, it’s important to look at what pollution is. In simple terms, pollution is the introduction of harmful chemicals into some areas of the environment. This could be the toxic gases released from the burning of fossil fuels, or it could be the ash created by a natural volcano eruption. As you can see, pollution can have natural causes or be caused by humans. Let’s explore the different types of pollution and what causes them.

The 7 Different Types of Pollution

When you think of environmental pollution, it typically comes in seven different types. These include air, water, land, radioactive, thermal, light, and sound pollution. Explore the definition and causes of each type of pollution.

In some cities, the air is dangerous to breathe. Why? Well, air pollution of course. Air pollution is when noxious gases and chemicals get suspended in air. Think about the smog covering some areas of California and New York. Dirt, grime, exhaust fumes, and other aerosols go into the air. These pollutants can go up in the atmosphere and infect our clouds creating acid rain, or they can just hang out like smog does and make it harder for people to breathe.

Humans need water to survive. That is a fact. However, trash and chemicals can get thrown into the ocean and lakes. This is called water pollution. Not only can they affect fish and other marine life, when pollutants get into the water, they have a devastating effect on the water cycle. Natural causes of water pollution include algae blooms and volcanos. However, humans also cause water pollution through trash and wastewater from factories.

Land pollution is another one of the big three pollution types affecting the human population. Land pollution happens when the soil gets contaminated by fertilizers or chemicals being dumped. The pollution in the land can seep into the ground water or run into lakes and streams creating a vicious pollution cycle.

Have you ever noticed that in a big city with a lot of lights, it is impossible to see the stars and galaxies? Light pollution, using electric lights to light up the sky, is the cause. While lights are great for helping us to see at night, too many lights cause light pollution blocking out the night sky. Light pollution can also be harmful to animals. For example, the lights of big cities can confuse migrating birds.

While most pollution types are straightforward, thermal pollution is a bit tricky. Many times, nuclear power plants and factories use water to cool things. However, if they put that warmed up water back into the environment, it wreaks havoc on the fish and wildlife because it has less oxygen. This is called thermal pollution. Thermal pollution can be caused by natural forces too like soil erosion giving water more sunlight.

Pollution is all around us. However, there are different measures you can take to reduce the pollution you have. For example, you might recycle or take your bike more. You can also use renewable energy sources.