What Are Affixes? Definition, Examples and Types

An affix is a set of letters generally added to the beginning or end of a root word or base word to modify its meaning. The root is the portion of the word that remains when all prefixes and suffixes have been removed. Now that you've answered the question, "What are affixes," explore the types by looking at several examples of prefixes and suffixes. 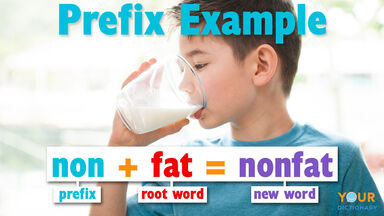 As you now know, an affix is a word that can be added to a root word or base word to add a new meaning. The two main types of affixes are prefixes and suffixes. For example, in the word conforming, con- is the prefix and -ing is the suffix, while "form" is the root. For another example, let’s examine the root word cred. Thanks to affixes, it can be transformed into incredible with the prefix in- and by the suffix -ible.

For example, let’s examine the root reserve. This word can't be broken down further, but it can be transformed into unreserved by the prefix un- or even unreservedly by the suffixes -ed and -ly. Now that you know a bit about root words and roots, it's time to dive right into the affix examples by looking at prefixes and suffixes.

Prefixes are attached to the beginning of a root word, root or a base word. They create a new word with a new meaning. Here’s a list of common prefixes, along with their meaning and a sample sentence:

From time to time, you might see a hyphen placed between a prefix and a root word. This is common when the prefix ends in the same letter as the root word begins. For example, if a world leader has an anti-immigration policy, you’ll generally want to place a hyphen between the prefix and the base.

Next, hyphens are required when a prefix is about to join a proper noun. For example, if you’re taking a trans-Atlantic flight from New York to Ireland, you’ll need a hyphen before the proper noun “Atlantic.”

Finally, four prefixes almost always take a hyphen before joining their root word or base word. This is one of those tricky grammar rules you’ll have to commit to memory. Most style guides instruct writers on hyphen usage. So, be sure to consult your teacher’s style guide when in doubt. In the meantime, try to err on the side of a hyphen if you ever want to use the following prefixes.

For more on hyphens, review these hyphen rules.

Suffixes are attached to the end of a root word or base word. They, too, create a new word with a new meaning. Review this list of common suffixes, along with their meanings and sample sentences:

It’s important to note that you can add more than one prefix or suffix to a word. You can see it in words like disenfranchisement and unsuccessfully. Other examples include nonconformist, counter-revolutionary, reorganization, and unquantifiable.

For even more examples, check out this list of suffixes and suffix examples.

In some cases, the spelling of a root is altered when a suffix is added. Consider the word unimaginable. Its root is “imagine.” Often, when a word ends in a silent -e, the -e is dropped and the suffix is added.

Another common sight is the changing of a “y” to an “i.” Take the word pretty. If you want to say someone is “more” pretty than someone else, you might say, “Rebecca Ferguson is prettier than her lookalike, Ingrid Bergman.”

You can't create an article about affixes without talking about combining forms. While combining forms aren't exactly an affix, they do act similarly. By definition, a combining form is a new word that is created by combining two independent words (para + trooper) or two affixes (micro- + -scope). While affixes are added to existing root words or roots to modify the meaning, combining forms work to create new words. For example, the para- in paratrooper represents the word parachute. Trooper and para- are combined to create a word for military officers that parachute out of planes.

Keep Building Out Words and Sentences

We hope these examples of affixes will help you continue to build out words and sentences with clarity and meaning. Stack your prefixes atop root words, and tag on a suffix where applicable. All this talk about root words may leave you wondering about base words. For more on the two terms, we hope you’ll enjoy are base words and root words the same?