What Are the Unique Properties of Water?

Water is one of the most important substances on Earth for all living things, so it shouldn't be surprising that this fascinating molecule has some special properties. Discover the chemical and physical properties of water that make it so unique. 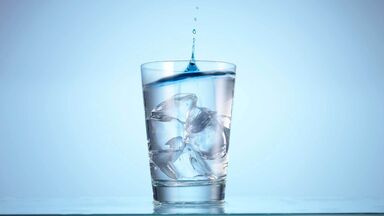 Exploring the unique properties of water begins with understanding its most basic chemical properties.

Water's polarity leads to its cohesion. Cohesion refers to the forces that cause or allow like molecules to stay together. The fact that water molecules naturally want to cling to one another means that water has cohesion. This is why water droplets can form. Cohesion also explains why a container can be filled with water to slightly above the point of overflowing before it actually spills.

The more viscosity a fluid has, the more it resists flow. Conversely, the less viscous a liquid is, the more freely it flows. Honey is an example of a highly viscous fluid. Water is, of course, not as viscous as honey, but it does have viscosity. The extent to which water is viscous is impacted by temperature. There is an inverse relationship, which means that as the temperature of water increases, its viscosity decreases.

Water has a high boiling point and a low freezing point, meaning that it does not boil or freeze quickly. The fact that water does not respond quickly to temperature fluctuations is why it can sustain aquatic life. The boiling point of water is 212 degrees Fahrenheit, which converts to 100 degrees Celsius. The freezing point of water is 32 degrees Fahrenheit, which is zero degrees Celsius.

Water is in a liquid state whenever it is not frozen into a solid state or boiled into a gaseous one. This is actually an unusual property for a substance that doesn't have carbon (water is made up of hydrogen and oxygen). Most substances that do not contain carbon are not liquid at room temperature. Water is the least dense when it is in a liquid state.

Ice is the solid state of water. As water cools, it becomes denser until it gets very close to its freezing point. As water cools and moves towards freezing, it starts to become slushy. Once water passes the freezing point, it becomes ice. Just before the point at which ice forms, the density of water starts to decrease rather than continuing to increase. This is why ice cubes float in a glass of water.

Steam is the gaseous state of water. When water is heated to its boiling point, it becomes steam. When water begins to boil, its hydrogen bonds start to break. As it reaches the point of steam, hydrogen bonds are not able to form. This explains why steam burns are actually even worse than boiling water burns. When steam comes in contact with a person's skin, that person feels the energy the steam has taken in as a result of breaking up the hydrogen bonds as well as the heat of the boiling water.

The taste of water varies based on what compounds are present within it. For example, saltwater tastes salty due to the presence of sodium chloride. This is true for naturally occurring saltwater, such as what is found in oceans, gulfs and other bodies of water, as well as manmade saltwater. If sugar (sucrose) is added to water, it will taste sweet.

The senses of taste and smell are closely related. The same types of compounds that can alter the way water tastes can also impact how it smells. For example, water that is high in sulfur (hydrogen sulfide gas) is also described as smelling like rotten eggs and having a sour flavor.

The color of water can vary based on a variety of factors. For example, ocean water appears blue but clean water from the faucet is clear. The water in the ocean absorbs red from the light spectrum, leaving behind the blue color commonly associated with ocean water. When ocean water has a different color, that can be related to other substances in the particle, such as algae or various particles.

Now that you are aware of some of the unique properties of water, try some hands-on learning to develop a deeper understanding. These water science experiments are a great place to start. From there, you may want to start studying examples of oceans and seas. There is much to learn about water.