What Happened in 1968? Historic Events Around the World

1968 was a very eventful year filled with change, turmoil, tragedy, and accomplishment. Discover some of the major events of 1968 that took place around the world. Review facts about key events to get an overview of this historic year. 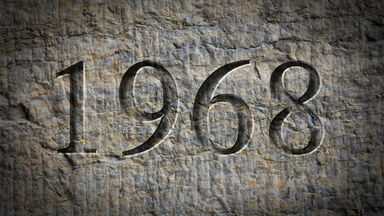 what happened in 1968
Advertisement

On January 30, 1968, North Vietnamese communist forces launched the Tet Offensive against South Vietnam and the U.S. troops stationed there. Striking on the lunar holiday of Tet, North Vietnamese forces were able to inflict significant damage and casualties in South Vietnam, contradicting messages from the U.S. government to the American people of a weakening communist presence. While the North Vietnamese forces were repelled, the Tet Offensive significantly weakened public support in the U.S. for continued involvement in Vietnam and forced the U.S. to re-evaluate its position regarding continued involvement there.

On March 8, 1968, politically active student groups referred to as the Komandosi (Commandos) held a rally on the campus of Poland's Warsaw University to demonstrate against repression by the Communist regime, including its decision to ban a classic play from being performed in the country. Around 2,000 peaceful protestors gathered only to be violently brutalized by forces acting on behalf of the government. This triggered a three-week outbreak of riots and escalating riots across the country, which ultimately led to a platform demanding reform in the country.

On April 4, 1968, the night after speaking at an event in support of striking sanitation workers in Memphis, Tennessee, Martin Luther King, Jr. was gunned down at his hotel. He was standing on his balcony prior to going to dinner with his colleagues when he was struck in the neck by a bullet, which is believed to have been fired by a sniper. He was rushed to a local hospital where it was declared that the civil rights leader had died. James Earl Ray confessed the following year and was convicted, though he later recanted his confession before dying in jail.

One of the most notable and enduring events of 1968 was the signing of the Fair Housing Act of 1968 into law. Signed just a week after the assassination of Martin Luther King, Jr. while riots were still sweeping the nation, this act expanded on the Civil Rights Act of 1964. The Fair Housing Act made it unlawful to refuse to sell, rent to or negotiate with any person based on their race, religion, nationality, sex, family status, or disability

April 20: Anti-Immigration 'Rivers of Blood' Speech in the UK

On April 20, 1968, Enoch Powell, a conservative British Member of Parliament (MP), delivered an extraordinarily controversial speech in which he criticized mass immigration, particularly Commonwealth immigration. This became known as the "Rivers of Blood" speech. The phrase “rivers of blood” did not actually appear in the speech. Rather, it is a reference to a quote from Virgil’s Aeneid, which Powell ended his speech with: “As I look ahead, I am filled with foreboding; like the Roman, I seem to see the River Tiber foaming with much blood.” Following this speech, Powell was immediately dismissed from his role with Britain's shadow cabinet.

May 3: French Student Rebellion at the Sorbonne in France

Beginning May 3, 1968, a student rally at the Sorbonne in Paris turned violent when responding police forces brutally beat protestors and arrested several hundred of them. This would continue throughout the month in what is now known as May 68. This led to more and more student protests, drawing additional brutality from law enforcement. The country's workforce joined in. By mid-May, many factory workers and other blue-collar workers walked off their jobs to support the students, bringing the economy to a halt. This led to President Charles De Gaulle dissolving parliament and calling for new elections then ultimately resigning the following year.

Former U.S. Attorney General (AG) Robert “Bobby” F. Kennedy, brother of John F. Kennedy, was a sitting member of the United States Senate and a presidential candidate at the time of his assassination. On June 5, 1968, Bobby Kennedy was shot in front of an audience immediately after claiming victory in the California primary at the Ambassador Hotel in Los Angeles, California. He died the next day.

Sirhan Sirhan, a Palestinian who was a citizen of Jordan, was arrested and convicted of killing Kennedy. Kennedy's son, Robert F. Kennedy, Jr., has asserted that another man conspired with Sirhan and actually fired the fatal shot. On August 27, 2021, Sirhan was recommended for parole. Robert F. Kennedy Jr. and Douglas Kennedy have expressed support for parole, while six other members of the Kennedy family have opposed it. It has yet to be determined whether Sirhan will be granted parole or released from prison.

July 1, 1968, marked the first day that the Nuclear Non-Proliferation Treaty (NPT) was opened for countries to sign, with Finland being the first to commit. On that day, 62 countries signed up. Other countries followed suit over time; as of 2021, there are more than 190 signatories, including the major superpowers. This multilateral treaty remains in effect today. Its focus is to prevent nuclear weapons (and associated technology) from spreading, to move toward nuclear disarmament and to encourage cooperation with regards to the use of nuclear energy for peaceful purposes.

There were countless Vietnam War protests throughout the entire time the U.S. was involved in the war in Vietnam. On July 4 ( U.S. Independence Day), 1968, there were numerous protests in the U.S. and abroad. Protestors gathered at official events in major American cities, including Washington, D.C. and Philadelphia. In Melbourne, Australia, a few thousand protestors vandalized the U.S. consulate. Elsewhere, including Brisbane, Australia and Stockholm, Sweden, anti-war parades were held on this day. Thousands of people attended these protests all around the world.

In 1955, Czechoslovakia, the Soviet Union and several other Eastern European nations signed the Warsaw Pact, a collective defense treaty in reaction to the integration of West Germany into the North Atlantic Treaty Organization (NATO). This led to an expansion of the Eastern bloc’s military forces.

However, on August 20, 1968, the Soviet Union invaded Czechoslovakia with the help of all the Pact nations except Romania and Albania. This became known as the Warsaw Pact Invasion. The goal of the Soviet Union was to halt Czechoslovakia’s growing reform efforts to transition the country from its communist policies. During this surprise invasion, Soviet-led troops took control of Prague and other cities. Thousands of Czech citizens left the country following the invasion. Many immigrated to Canada and others made their way to Australia. While the invasion slowed Czech reform, it set the stage for the ultimate splintering of communism in Eastern Europe.

September 18: Russian Spacecraft Goes to the Moon and Back

In September, 1968, the unmanned Russian spacecraft Zond-5 became the second to fly around the moon and the first to return to Earth successfully. It also carried two tortoises, fruit fly eggs and plants on board. Both tortoises survived the journey to the moon and back without suffering ill effects.

The spacecraft departed Earth on September 14 and successfully circled the moon on September 18. The reentry capsule entered the Earth’s atmosphere on September 21. In all, the trip lasted 6 days, 18 hours and 24 minutes.

On September 20, 1968, Boeing introduced its 747, the world's first wide-body jet. The first flight took place the following year, kicking off the Jumbo Jet Age. As the largest passenger aircraft in the world, it changed air travel forever. It quickly became the standard for international air travel and is credited with starting "a revolution in air travel." These planes were also adapted for military purposes, including being put into use as Air Force One jets. These planes have had a significant impact on aircraft design, including the larger planes with which they now share the skies.

On October 16, during the Olympic medal ceremony in Mexico City, two Black athletes, Tommie Smith and John Carlos, raised their black-gloved fists during the National Anthem. They had just won the gold and bronze medals respectively for running. The silver medalist, a white Australian named Peter Norman, did not raise his fist but stood in solidarity with Smith and Carlos. All three men’s careers were negatively affected by this display. The men had raised their fists to highlight the Civil Rights movement of the time. Prior to the Olympics, Smith and Carlos had helped organize the Olympic Project for Human Rights. Smith would later go on to clarify that it was not a “black power” salute so much as a “human rights” gesture. This display is still regarded as one of the most controversial moments in Olympics history.

On November 5, 1968, Richard M. Nixon was elected to serve as the 37th president of the U.S.. The Republican received 301 electoral votes, while his Democratic challenger, Hubert Humphrey, received only 191. He campaigned on a platform of law and order, committing to work toward ending the war in Vietnam. That process took much longer than expected; he was in his second term as president by the time the U.S. withdrawal from Vietnam came to pass. He ultimately resigned in 1974 due to the Watergate cover-up.

After lifting off on December 21, 1968, the crew of Apollo 8 became the first people to ever leave low Earth orbit. Just a few days later, on December 24 (Christmas Eve), Apollo 8 became the first manned spacecraft to orbit the moon. After witnessing firsthand what no human had ever seen before, the crew and craft returned safely to Earth on December 27. This mission paved the way for further space exploration and marked a fitting and hopeful end to what was an extraordinarily difficult and turbulent year in the U.S. and around the world.

This timeline touches on just a few of the many incredible events that took place around the world during 1968, some tragic and some inspiring. Now that you are aware of some of the significant events that took place in 1968, learn more about other key historical events. Start by reviewing a timeline of the Civil Rights movement to gain perspective of the era that led up to the world-changing events of 1968.