What Is a Round Character? Lifelike Examples in Fiction

Whether you’re watching a movie or reading a novel, you want to get invested in the characters’ lives enough that you can write fanfic about them or ship your favorite characters. That can be hard when characters are presented as flat sketches without personalities. Round characters feel real, complex, and relatable, and they can potentially help you navigate all the highs and lows of your own life. 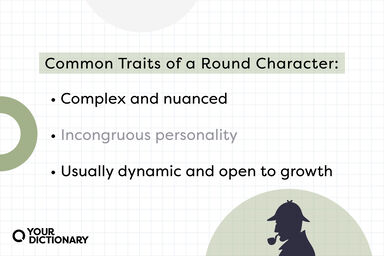 What Is a Round Character?

Round here refers to a character being well-rounded, not necessarily their physical form. Flat characters are two-dimensional, fairly simple, and often presented as a caricature or stereotype. By comparison, round characters have multiple dimensions. They are written to reflect all the complexities, layers, and gray areas of being a human being, as opposed to being complete icons of perfection.

Common Traits of Round Characters

Round characters have infinite different traits that make them complex. While that multifacetedness is sort of the point, round characters do share some broad, general characteristics:

For even the most seasoned appreciator of art and media, actually spotting a round character can be difficult. Certain broad traits (like good and bad) can be subjective. The concept of personal growth can also be subjective. Seeing some examples of round characters can give you a better idea of what to look for.

Elizabeth Bennet in "Pride and Prejudice"

Although Elizabeth has a tendency to judge people before she knows them, she also deeply loves those she truly knows. She’s smart and independent, but she’s also vulnerable. Over the course of the story, she learns about her own prejudices and begins to change.

Gandalf in the "Lord of the Rings" Series

Although a wise, powerful wizard, Gandalf is far from perfect. He angers quickly and sometimes makes mistakes, but he’s also kind, wise, and eager to help others. He also has a wonderful sense of humor.

Jay Gatsby in "The Great Gatsby"

At times, Jay Gatsby appears confident and friendly, a happy man and a party animal with many friends. At other points, he seems vulnerable, afraid, and deeply isolated.

Anne Shirley in the "Anne of Green Gables" Series

By turns kind, intelligent, loyal, impulsive, thoughtless, and wild, Anne feels like a real person, and she’s unforgettable for that reason.

Hamlet believes he is an excellent judge of character, and yet he fails to see some of the things going on around him. His devotion to his father causes him to be blind to his own faults and ignore many of his own violent actions. At the same time, he’s vulnerable and trying his best.

Scout in "To Kill a Mockingbird"

Scout is an innocent child with a surprising, worldly wisdom. She is an outspoken, compassionate tomboy who is conscious of social pressures and the bigotry at the heart of the story.

Rhett Butler in "Gone With the Wind"

Rhett Butler’s rule-breaking roguish nature conflicts with his personal sense of ethics and his expectations for marriage and love.

Laura in the "Little House on the Prairie" Series

Writing about her younger self in her series of historical fiction novels, Laura Ingalls Wilder created a realistic depiction of pioneer life from the perspective of a little girl. Although Laura is smart, loving, and highly observant, she disobeys her parents, acts impulsively, and makes mistakes along the way.

While Jane Eyre is a round character herself, Mr. Rochester also has plenty of complexity. He seems reserved and even unkind at times, but it’s gradually revealed that he is tortured by unhappiness and bound by duty. He even shows tenderness and love toward Jane.

Flora Poste is nosy and convinced about her own opinions. Despite being bossy, she isn’t unkind. Her humorous view of life is endearing.

Prince Stepan Arkadyevich Oblonsky is incredibly kind, but he’s also willing to sacrifice others’ happiness and his own honor for momentary bliss.

Beautiful, intelligent, and charismatic, Becky Sharp is one of William Makepeace Thackery’s most memorable characters. She is incredibly ambitious and conniving, and she recognizes flaws in other people and uses them to her advantage.

Randle Patrick McMurphy in "One Flew Over the Cuckoo’s Nest"

Ken Kesey’s most famous character, Randle Patrick McMurphy, is beloved because of his complexity. Although he’s a convicted felon and has a questionable moral code, the reader sees his true nature in his compassionate interactions with the other inmates in the mental institution.

Holly Golightly in "Breakfast at Tiffany’s"

Although she appears to have a light-hearted and happy life, Holly is deeply lonely and sad. Like a real person, she isn’t all one thing or the other, but is a mix of traits.

When he created Sherlock Holmes, Sir Arthur Conan Doyle wrote one of the most famous characters in literature. Holmes’ powerful deductive abilities are stunning, even more than a century later. Yet, it’s his guarded emotions, loyalty, and fierce reliance on the analytical that make him human.

Your favorite teen wizard from Hogwarts, Harry has a lot to live up to as The Boy Who Lived. Much like any teen going through it, Harry can be brash, emotional, and hot-headed, but he’s also a literal teen who has gone through some serious trauma while dealing with some intense expectations. Despite that, he’s also brave, loyal, and loving to his friends, and he genuinely cares about all creatures.

Tips for Writing a Round Character

In general, character development of any kind is hard stuff, even for veteran writers. Writing a round character can take time and some trial and error, but with practice, it gets a little easier to round out those characters.

For practice, write a scene where you take your character to lunch. Think about the restaurant they’d choose, what they would order, and what you would talk about.

Whether it’s your chosen family or the family you’re born into, the people who raise you can naturally affect your personality, your quirks, and who you are now. That applies to your round character, too.

You don’t have to go too deep into their family tree or even mention them in the actual piece of writing. Start with the immediate people who raised your character. Does your character have a good relationship with their mom? Did that relationship change from childhood to adulthood? How does that shape their thoughts and actions now?

Surround Them With Other Characters

Most people don’t live in solitary bubbles. They affect and are affected by other people around them. The way that other characters react around your round character can inform you of potential personality quirks and nuances.