What Is a Soliloquy? Examples and Purpose in Drama

Just like with literature, playwrights use different tools to tell their stories. One such tool is a soliloquy, which is a speech telling their inner feelings. Get examples of soliloquy found in drama, along with how it's different from an aside and a monologue. 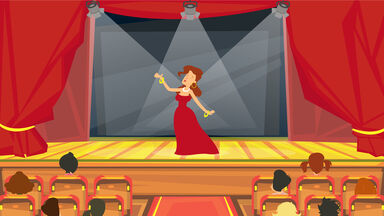 soliloquy by woman on stage
Advertisement

What Is a Soliloquy?

If you’ve ever been to a performance of any of Shakespeare’s plays, you’ve noticed times when the character tells the audience their internal thoughts or feelings. It happens in other plays too, but Shakespeare is famous for it. This speech telling the audience how they feel is called a soliloquy.

Purpose of a Soliloquy

Even the best of actors can’t get across some of the emotions and turmoil going on inside their heads. Therefore, it’s not surprising the main purpose of a soliloquy is to tell you how they are feeling. However, they give you other insights into characters as well.

Now that you know how a soliloquy can work within a drama, explore a few famous examples.

Soliloquies and Shakespeare are like peanut butter and jelly. You can’t think about one without the other. While Shakespeare’s plays, such as Romeo and Juliet and Hamlet, are some of the most famous examples, instances of soliloquy in drama can be found all over the board.

Explore Helena’s jealousy and hurt through her soliloquy in Act 1, Scene 1:

How happy some o'er other some can be!

Through Athens I am thought as fair as she.

But what of that? Demetrius thinks not so;

He will not know what all but he do know:

And as he errs, doting on Hermia's eyes,

To have his sight thither and back again.

In this scene, the man she liked just started chasing after her bestie. Helena uses this soliloquy to express the hurt she’s feeling.

Another Shakespeare example can be found in Act 5, Scene 5 by Macbeth:

Creeps in this petty pace from day to day,

To the last syllable of recorded time;

And all our yesterdays have lighted fools

The way to dusty death.

Out, out, brief candle!

Life's but a walking shadow, a poor player,

That struts and frets his hour upon the stage,

And then is heard no more. It is a tale

Told by an idiot, full of sound and fury,

Macbeth uses this soliloquy to show the audience just how downtrodden and despaired he is in this moment. It shows his weariness of life and how meaningless it all is.

The Glass Menagerie by Tennessee Williams

A more modern example of a soliloquy is found in The Glass Menagerie. It's spoken by Tom at the very end of the play.

I didn’t go to the moon, I went much further--for time is the longest distance between two places. Not long after that I was fired for writing a poem on the lid of a shoebox. I left St. Louis. I descended to the steps of this fire escape for a last time and followed...

In this final moment of the play, Williams is revealing Tom’s thoughts that everything is falling apart to the audience. It makes a poignant ending when Laura blows out the candle.

The Crucible By Arthur Miller

Another modernish example of a soliloquy is spoken by John Proctor in Act 2.

Peace. It is providence, and no great change; we are only what we always were, but naked now. Aye, naked! And the wind, God’s icy wind, will blow!

In this moment, Proctor is revealing his feelings about good and evil fighting in him. He states how he wants the truths to be revealed, but that will mean his sins are uncovered as well.

Soliloquy vs. Aside vs. Monologue

In plays, you see all different types of speeches and a soliloquy is just one of them. It is often compared to an aside or a monologue. To understand their difference, it’s important to look at their literary definitions.

Therefore, while a soliloquy, aside, and monologue are all different types of speeches in a play or performance, they each have a different purpose or meaning.

A soliloquy is an important part of a play that gives viewers insight into their thoughts and feelings. While these were popular during the Renaissance era, you can still find some modern examples. Learn more about genres in plays, movies, and books by exploring examples of different genres.