What Is an Anachronism Example? Time Errors in Fiction

Anachronisms are when something doesn’t fit into a time period. This can be an intentional or unintentional anachronism. Explore both through anachronism examples found in movies and literature. 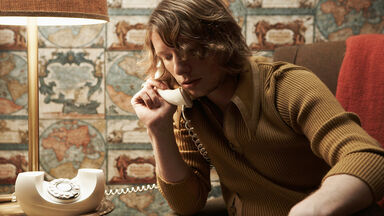 What Is an Anachronism Example?

Have you ever watched a movie and thought to yourself, “That airplane doesn’t fit in that time period, right?” This is an anachronism, or when something or someone is in the incorrect time period.

Some literature or movies might intentionally create an anachronism for the storyline or to add humor. For example, the Flintstones mixing with dinosaurs. Many times, historical comedies might have anachronisms to add a comedic effect. Think of the Mel Brooks movie Blazing Saddles. Though it was set in 1874, they broke down a wall to a modern Hollywood studio.

Other anachronism errors are completely unintentional. These are often an error on the producer or writer’s part from not thoroughly researching or based on their own biases. For example, a writer of a book featuring the Titanic knows it ultimately sank. This could color their writing of the story since they know what happens in the end.

What is an unintentional anachronism example? In the movie, Back to the Future, Marty McFly has a rockin' scene where he plays Johnny B. Goode in 1955. What you might not have realized is that the guitar Marty uses, the Gibson ES-345, didn’t debut until 1958. Whoops!

While you can call anything placed in the wrong time period in literature or movies an anachronism, there are different types.

With the literary definition of anachronism under your belt, explore different anachronisms found in literature and movies.

Anachronisms are easy to find in movies. Given the visual media, sometimes these intentional and unintentional slips are hard to miss.

Forrest Gump took us through all different eras of history. However, his investment in Apple in 1975 isn’t chronologically correct making it an anachronism. Why? Because Apple didn’t go public until 1980.

A dog is a dog, right? Wrong. You need to pay attention to breeding. Gladiator certainly didn’t. One of the canine companions of a soldier was a German Shepherd. However, this breed only goes back to the 1800s.

The Green Mile had a lot of magical realism elements. However, you might not have realized the electric chair was one of them. During 1935, when the movie was set, the gallows were Louisiana’s preferred execution form.

Looking for a parachronism in movies? Look no further than Napoleon Dynamite. While you might swear that the movie was set in the 1980s, it’s actually set in 2004. This means everything from his VCR to his moon boots are seriously out-of-date.

Examples of Anachronism in Literature

While you might be more aware of anachronisms in movies, they happen in literature too. Explore several famous anachronism examples.

In Act 2, Scene 1 of Julius Caesar, you can find a famous example of an unintentional anachronism. Brutus and Cassius talk about a mechanical clock, but in their time, it wasn’t even invented.

Cassius: “The clock has stricken three.”

Ross also provides another interesting anachronism in Act 1, Scene 2 of Macbeth by discussing dollars even though it wasn’t the monetary unit used at the time.

Nor would we deign him burial of his men

Till he disbursed at Saint Colme’s inch

Ten thousand dollars to our general use.

Mark Twain’s The Prince and the Pauper

In chapter three of The Prince and the Pauper, set in the 16th century, Twain includes an unintentional anachronism by discussing Punch-and-Judy shows, which were a show of the 17th century.

In truth, yes, so please you, sir, save when one is hungry. There be Punch-and-Judy shows, and monkeys—oh such antic creatures! and so bravely dressed!

Anachronisms are things, people, or phrases that just don’t belong in a specific time period. These might be intentional anachronisms that add a comedic effect, or they could be unintentional ones like the clock in Julius Caesar. Interested in learning more about literary elements. You can check out examples of tropes.