What Is an Epilogue? Examples and Purpose

Have you ever finished a story and wondered, “wait that’s it?” The story would have benefited from an epilogue. What is an epilogue? It’s a section after the final chapter to offer further information about characters. Learn the purpose of an epilogue through examples. 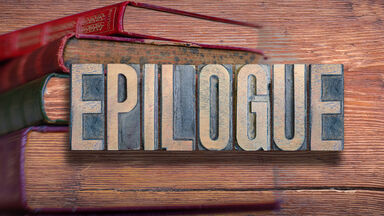 What Is an Epilogue?

When it comes to a book, you invest a lot of time into characters. A good series can even take days out of your life. Therefore, at the end, you want all your questions answered. Writers understand that. Therefore, after the final chapter of the final book, most writers will add an epilogue. This is a supplemental section to tell readers the fate of the main characters and wrap up any other loose ends that weren’t accomplished in the main story.

For example, in the Harry Potter series, the epilogue takes place 19 years later. We not only find out how the characters are doing but their occupations, relationship statuses, and more. This works to give readers that have invested time into the books and characters closure.

Purpose of an Epilogue

First and foremost, epilogues offer readers a hint into the future. A compelling epilogue shows you how some of your favorite characters fared or their future lives. It might tell you how a marriage is going or how they fit in at their new job. Find out how they used the lessons they learned in the story to grow as a person. However, like most things in literature, epilogues are multifaceted.

Since writers can play around with the epilogue, this is a great place to hint at a sequel. For example:

As Lorel picked up her beautiful bouncing baby boy, she noticed a note slipped under her child. The familiar red writing propelled into the past like a thunderbolt. Clenching her fist, she crumpled the note. Throwing it in the trash, she walked her child into the kitchen knowing Damon coming back from death was an impossibility.

Reading that passage, you as the reader get a bit excited knowing a sequel is to come.

Some stories have an important message. For example, in a story about the devastating effects of prejudice, an author can write an epilogue to reiterate this central theme. Given the importance of this theme, this can leave a lasting impression on readers.

Now that you know the definition of an epilogue, it’s time to look at a few great examples in classic and modern literature.

Reader, I married him. A quiet wedding we had: he and I, the

parson and clerk, were alone present.

The epilogue in Jane Eyre tells the reader how her love affair with Mr. Rochester ended. Readers looking for a happily ever after between the two characters find it in this epilogue.

If we shadows have offended,

Think but this, and all is mended,

That you have but slumber’d here

While these visions did appear.

The dream-like quality of the play is maintained through the epilogue delivered at the end by Puck. He ensures any audience member that is offended to think of this as just a dream, and they are still friends in the end.

YEARS passed. The seasons came and went, the short animal lives fled by. A time came when there was no one who remembered the old days before the Rebellion, except Clover, Benjamin, Moses the raven, and a number of the pigs.

In Animal Farm, Orson Wells gives readers insight into what happened to the animals in the future. The epilogue also points out one important fact about the pigs as they are now indiscernible from the men.

They play in the Meadow. The dancing girl with the dark hair and blue eyes. The boy with blond curls and gray eyes, struggling to keep up with her on his chubby toddler legs. It took five, ten, fifteen years for me to agree. But Peeta wanted them so badly.

In the epilogue of her Hunger Games series, Suzanne Collins provides insight into Peeta and Katniss’s ending. Not only do they end up together, but you learn they have children as well.

Epilogue and afterword can easily get confused. Both discuss elements of a story and come at the end. But an afterword is a comment about a story. It could be the author or other important figure providing a bit more information about how the story came to be. For example, an author might discuss important research they used in the creation. An epilogue is connected to the story and the characters.

Epilogue: Only an Extension

Great epilogues can be a wonderful addition to a story. However, it’s important to remember they are only an addition. An epilogue isn’t meant to be the ending itself or make up for a weak ending. Additionally, they aren’t meant to be complicated or end on a cliffhanger. Epilogues should be a short, easy to understand extension for readers to get a little more out of the lives of characters they’ve come to love. Interested in learning more about writing techniques? Find out how to write an epilogue or read about what a prologue is.