What Is an Eponym? Meaning and Popular Examples

Did you know that the word sideburns is an eponym? An eponym is when a discovery, invention, place, work of art, etc. is named after a person. Get an in-depth definition of what an eponym is along with several eponym examples. 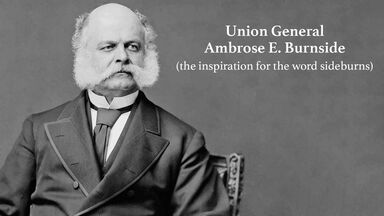 Portrait of General Burnside as Inspiration for Eponym Sideburns
Advertisement

What Is an Eponym?

You might not realize it, but you use eponyms all the time. An eponym is when the names of activities, products, objects, and discoveries take their name from a particular person. In modern usage, it can also be when a brand name becomes synonymous with that item.

Think of how someone with an inferiority complex is said to have a Napoleon complex. Named after Napoleon Bonaparte, it's typically attributed to short people that make up for their stature by being overly aggressive. While Napoleon was actually of average height, political cartoons didn’t present him that way. Hence the Napoleon complex.

Now that you know what an eponym is, you can probably think of lots of them. Eponym examples can be found in all different types from product eponyms to literary eponyms.

Much like Napoleon, many historical figures, inventors and theorists have become eponyms. It could be from their contributions to society or just for their unique hair such as in the case of Ambrose Burnside. For example, the word sandwich comes from the Earl of Sandwich, a noble title in the Peerage of England. Explore other famous historical eponyms:

You’ll also find characters that become eponyms outside of the name of the story. For example, Chicken Little is a character in a fable, but the name is also used as a term for someone who gets panicked easily. Another example is Goody-Two-Shoes. While it’s a character in a fable, it’s also used negatively to describe someone who always does the right thing. Another popular eponym example is a grinch, the miserly character from How the Grinch Stole Christmas.

When it comes to eponyms in pop culture, all you must do is look at a few album titles. When an artist or band releases a self-titled album, this is an example of an eponym because the product is named after the creator.

Eponyms are not always a thing or concept named after a specific person. Proprietary eponyms are brand names or generic trademarks that became synonymous with the product itself and ultimately common household names. One great example is Kleenex. Kleenex is a brand name of facial tissues; however, it’s become synonymous for all facial tissues despite the brand.

Other product names that are eponyms include:

Eponyms are all around you. Some are clear, like a self-titled album or book, but others, such as sandwich, have become everyday words. Knowing what an eponym is can help you to find a few new ones. Now that you’ve got the meaning of eponym down, find out what anaphora is and how it is used through anaphora examples.