What Is an Example of an Enthymeme in Literature?

If A=B and B=C, then A=C. That’s logic. Enthymeme uses the same logic, but the B=C is implied rather than stated. Learn more about enthymeme by looking at examples of enthymeme. 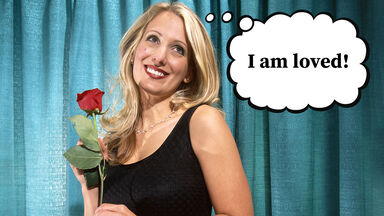 Enthymeme is all about the argument. Well, more like logical deduction. Enthymeme is a type of syllogism characterized by the great Aristotle. Before you can break into enthymeme, it’s helpful to look at syllogism first.

Syllogism is your typical three-part logical reasoning. For example:

Therefore, I am loved.

Now, enthymeme follows the same logic. However, one premise is hidden or implied but not expressed. So in an enthymeme, you just have the one premise and conclusion. For example:

What you aren’t seeing in an enthymeme is the second premise of ‘I got roses’. This is simply implied in the statement.

What Is an Example of an Enthymeme?

Enthymeme is used in everyday life. Not only might you use it in common school arguments, but in politics as well. Explore some common enthymemes along with what is implied.

Examples of Enthymeme in Literature

Enthymeme works to add a bit of intrigue to your favorite literature. Explore different enthymeme examples found in literature.

Shakespeare’s Julius Caesar can provide you with a few different examples of enthymeme. However, this one about Brutus helps to exemplify this logical deduction.

But Brutus says he was ambitious; And Brutus is an honorable man.

Beauty: When the Other Dancer Is the Self by Alice Walker

In Alice Walker’s short autobiography, you can find an example of an enthymeme.

These are not "real" guns. They shoot BBs, copper pellets my brothers say will kill birds. Because I am a girl, I do not get a gun.

In this logical deduction, the implied premise is girls don’t get guns. She’s a girl. Girls don't get guns. Therefore, she does not get a gun. Simple as that.

Enthymeme in Movies and Pop Culture

Literature isn’t the only place to find enthymemes. You can find them in movies and even product ads. Explore a few pop culture enthymemes.

James Bond: From Russia With Love

Do you like Bond movies? Who doesn’t? Well in James Bond: From Russia With Love, you can find this enthymeme.

There’s a saying in England. Where there’s smoke, there’s fire.

In this Bond line, you don’t see the implied deduction that fire makes smoke.

You’re forcing an entire village out of their homes just for you!

This one is a bit of a stretch for an enthymeme, but you can still see the implied premise of forcing an entire village to leave their homes is bad. However, in this case, the emperor is just too selfish to see it.

Looking for a non-movie pop culture enthymeme? Look no further than Smuckers.

With a name like Smucker's, it has to be good.

Smuckers is a trusted name. Trusted names are good. Therefore, with a name like Smuckers, it has to be good. It’s all about the implied premise.

Like any logical deduction, you’ll find enthymeme used in debates and speeches. You might even find it used in famous speeches like this one from President George W. Bush:

The battle of Iraq is one victory in a war on terror that began on September the 11th, 2001, and still goes on. . . . With those attacks, the terrorists and their supporters declared war on the United States. And war is what they got.

In this enthymeme, you don’t need the implied premise of Saddam Hussein being involved in the 9/11 attacks to get the meaning. It’s easy to see. And when you hear speeches or even speech in public yourself, it's easy to fill in the blanks for the implied premise.

An enthymeme is a syllogism where one premise is implied rather than spoken. You can find enthymemes in literature, movies, and even speeches. Learn more about logic and fallacies in logic through types of logical fallacies.