What Is an Archipelago? Examples Around the World 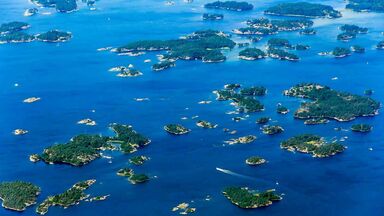 What Is an Archipelago?

The word archipelago (pronounced aar·kuh·peh·luh·gow) refers to an island chain. An archipelago is a type of landform that consists of a group of islands, often including similar formations like atolls or islets. The islands that make up an archipelago are clustered or form a chain within a body of water, such as an ocean, gulf, sea, or lake.

There are many archipelago examples around the world, from sunny tropical locations to frigid arctic environments.

The Balearic Islands make up a region of Spain. They are located in the western portion of the Mediterranean Sea, extending across approximately 3,000 miles. There are four main islands, the largest of which is Mallorca (Majorca). It is a very popular tourist destination, as is Ibiza, which is the second-largest island in the archipelago.

The Canadian Arctic Archipelago encompasses 540,000 square miles, the majority of which is in Canada's northernmost territory. It includes nearly 100 large islands, as well over 36,000 smaller ones. It is bordered by the Beaufort Sea to the west, the Arctic Ocean to the north and Hudson Bay to the south. The islands are separated by the Northwest Passage. The climate is very harsh on these polar islands, so they are largely uninhabited.

The Caribbean Islands as a whole make up an enormous archipelago between North America and South America. The northernmost island in the Caribbean archipelago is Cuba and the southernmost is Trinidad. The archipelago includes a number of independent island nations, as well as islands that are territories of nonadjacent countries. There are over 700 islands in the archipelago, spread out over more than a million square miles.

Greece's Cyclades islands are located in the Aegean Sea between Crete and Attica. The word Cyclades translates to "circular islands" in English, so the archipelago's name refers to the fact that the islands make a circle around the island of Delos. According to Greek mythology, Delos is the birthplace of Apollo and Athena. Mykonos and Santorini are among the most widely known and visited islands in the Cyclades.

The Florida Keys are an archipelago that begins just south of Miami and extends 125 miles. It consists of approximately 1,700 islands, though the majority are not inhabited and are accessible only by boat. Over 40 of the islands are connected by a bridge, starting with Key Largo at the northernmost point. Key West is the southernmost island.

Located in the Norwegian Sea, the Loften Islands are positioned far above the Article Circle, at the same latitude as Greenland, though the climate is milder due to the influence of the Gulf Stream. This relatively small archipelago has seven main islands and a few smaller ones. It stretches over just under 100 miles of water. The Vestfjord separates the archipelago from Norway's mainland.

Tierra del Fuego sits at the bottom of the continent of South America, where the Atlantic and Pacific oceans meet. The largest island in the archipelago is Isla Grande (Big Island). Just over 60 percent of this island part of Chile and just under 40% is part of Argentina. There are a number of smaller islands in this archipelago, some Chilean and some Argentinian. As a whole, the archipelago encompasses about a thousand miles. It is separated from the content by the Strait of Magallanes.

New Zealand is both a country and an archipelago. Located about a thousand miles from both Australia and Polynesia in the South Pacific Ocean, New Zealand consists of three main islands and more than 700 small islands. Most of the smaller islands are located within 30 miles of the main islands, but some are more than 600 miles offshore. It is situated along the Pacific Ring of Fire.

Now that you are aware of what an archipelago is and know some examples, it's only natural to focus next on learning more about the bodies of water where these landforms exist. Start by reviewing some examples of oceans and seas. From there, consider strengthening your vocabulary by learning some new ocean and sea words.