What Is Considered a Graphic Novel? Stories as Comics

If you find yourself wondering “What is a graphic novel?” you are not alone. Graphic novels are a relatively new genre of books that often confuses readers. Graphic novels have characteristics of comic books and standard novels. Explore what is considered a graphic novel and why to better understand this visual genre. 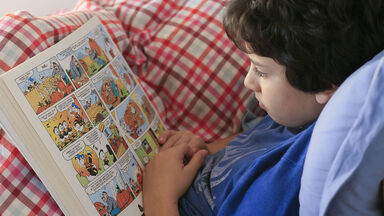 What Is a Graphic Novel?

The simple, general definition of a graphic novel is “a story of some length in comic-strip format, usually bound as a book.” Graphic novels can be found in almost any book genre. It is their format that categorizes them more than their content.

Major book publisher Penguin Random House defines a graphic novel as a book that “uses the interplay of text and illustrations in comic-strip format to tell a story.”

Graphic novels can often be distinguished by their characteristics. If a book has all of these elements, it is likely a graphic novel.

Big book publisher Scholastic shares that graphic novels must tell a story “using a combination of words and pictures in a sequence across the page.” Picture books and illustrated novels typically tell a story through words, then use images to complement the story.

Examples of Graphic Novels for Kids

Graphic novels are trending for kids, especially early readers and chapter books. Even many classic children’s novels have been reformatted in graphic novel form for today’s market.

Examples of Graphic Novels for Adults

Long ago, graphic novels referred to novels that contained graphic details of things like death or sexuality. Today, they continue to take on taboo topics, but adult graphic novels aren’t necessarily “graphic” in the old sense of the word.

Images have been used to tell stories throughout history, even in cave drawings. Graphic novels can be considered the latest step in the evolution of comic strips, which appeared in newspapers as early as the late 19th century. Comic strips then became comic books in the early 1900s.

There is some disagreement on the first graphic novel, but A Contract with God, and Other Tenement Stories by Will Eisner is a great early example that was published in the U.S. in 1978. Although books like this were reformatted forms of standard comics, the media viewed them as different.

Whether you love them or hate them, or even understand them, graphic novels are a unique genre. Explore other book types, or genres, to broaden your literary horizons even more.