What Is Falling Action? Purpose in a Story’s Plot

You may have heard the term falling action when discussing elements of plot. But what does it mean, and why is it important in storytelling? Keep reading to learn all about falling action and its purpose in a story’s plot. 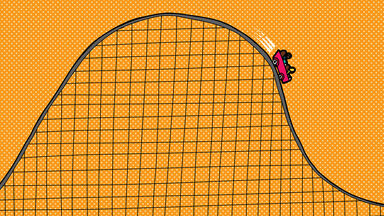 Falling action refers to the events that follow the climax of a story. While rising action builds tension throughout the story, falling action decreases that tension. It leads to the character’s ultimate resolution.

Falling Action Within the Plot Structure

If you’re familiar with basic plot structure, you know that it looks like a mountain. Along the lines of the mountain are the five basic parts of a story plot:

It’s tempting to end a story very quickly after reaching the climax, skipping the falling action entirely. But falling action has a very important purpose in a story’s plot. Here are some reasons why including falling action is a good idea when telling a compelling story.

Characters use falling action to settle into whatever has changed in the climax, and to slowly work their way to resolving internal and external conflicts. A story without a resolution is not satisfying – and a resolution that comes immediately after a climax doesn’t feel genuine. Falling action may include exciting moments, but they should not be as important or exciting as the climax itself.

Like the story’s characters, an audience needs a moment to regroup and assess what has just happened in a tense climax. Falling action provides an opportunity for reflection and evaluation before moving on to the story’s resolution. Writers should not introduce new conflicts in this section of the plot, as the action is meant to fall.

Keeping a balance between rising and falling action is key to an even story. A story with too much rising action may make their readers impatient for a climax, while too much time between a climax and resolution tends to drag and bore their audience. A well-written story includes more rising action than falling action, but not too much (or too little) of either.

Think of your favorite book or movie, and consider its climactic moment. What happened next? That’s the story’s falling action. Check out these examples of falling action in film and literature:

In the classic fairy tale “Cinderella,” the rising action leads up to Cinderella attending a ball, where she loses her slipper. The tension goes up when the prince must search the kingdom to find the slipper’s owner. At the story’s most climactic moment – Cinderella’s turn to try the slipper – the story reaches its highest tension. The prince’s recognition of Cinderella begins the story’s falling action, leading to its resolution: their wedding and happily ever after.

The Empire Strikes Back

Star Wars: A New Hope (1977) ended with serious questions about Luke Skywalker’s father. In The Empire Strikes Back (1980), the story’s rising action brings Luke through Jedi training and into a battle with Darth Vader – who, in the movie’s climax, reveals himself to be Luke’s father. Everything that happens after that iconic moment, including Luke’s rescue by Leia and Lando Calrissian, is falling action, awaiting the trilogy’s resolution in Return of the Jedi.

The Wizard of Oz

In both L. Frank Baum’s novel The Wizard of Oz and its 1939 film adaptation, Dorothy follows a path that should lead her home. The events in her journey amp up the tension as the Wicked Witch of the West follows and torments Dorothy. However, Dorothy overcomes her antagonist by pouring water in the story’s climax. Her resolution puts her at home where she belongs, but the events that connect the witch’s downfall to Dorothy’s return to Kansas make up the story’s falling action.

Understanding the Elements of Storytelling

Identifying the parts of a plot can help you understand where a story is going. It can also help you determine whether you enjoy the story and assist when you’re writing your own tales. For more inspiration, check out these examples of short stories.