What Is a Legend? Story Examples & Common Characteristics

Have you ever heard of the legend of the fountain of youth? What about King Arthur? These are stories that seem to be true but they aren’t. In fact, legends are so believable that some explorers created expeditions around them. Get an answer to the burning question, "What is a legend?" along with a few examples of this story type. 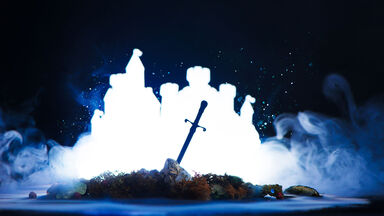 In simple terms, a legend is a story. However, as more than just a story, it has a bit of history to it. Typically, these stories started as oral stories that took on a life of their own. Often, a legend tells the exploits of a character like a historical account that could be possible. And, typically, legends have at least a little historical truth to them. For example, King Arthur of the round table was an actual knight.

Characteristics of a Legend

But what makes a legend, a legend? Well, legends have a few distinct characteristics to tell you right away; this story is legendary.

Legends are all around you. Some are so ingrained into your mind that you might not even realize they are legends. Explore a few examples of legend stories to delight and awe readers.

King Arthur and the Round Table

Unless you’ve been living under a rock, you’ve probably heard some version of the tale of King Arthur and his round table. Not only does he pull a sword out of a stone, but Merlin, Lancelot and Guinevere are mixed up in there too. While Arthur was an actual knight, the stories surrounding him came from Thomas Malory in Le Morte D’ Arthur. You can tell King Arthur falls into the category of a legend because it reads like a history book, but it's fiction. Check out this excerpt about Arthur’s birth:

"And when the child is born let it be delivered to me at yonder privy postern unchristened. So like as Merlin devised it was done. And when Sir Ector was come he made fiaunce to the king for to nourish the child like as the king desired; and there the king granted Sir Ector great rewards."

Robin Hood, who robbed from the rich and gave to the poor, is a household name. While the exploits of Robin Hood and his merry band of thieves are based on the imagination of Howard Pyle, his writings were based on a popular hero of medieval England. Several different writings of the time discuss Robin Hood. And, if you didn't know any better, you might think when reading Robin Hood that it's a historical account. View an excerpt of Robin Hood:

"In merry England in the time of old, when good King Henry the Second ruled the land, there lived within the green glades of Sherwood Forest, near Nottingham Town, a famous outlaw whose name was Robin Hood. No archer ever lived that could speed a gray goose shaft with such skill and cunning as his, nor were there ever such yeomen as the sevenscore merry men that roamed with him through the greenwood shades."

Queen Boudica, or Boudicca, was a British Queen who ruled the Iceni tribe. Boudica was an actual queen that fought the Romans; however, her legend has become larger than life. This Celtic warrior queen's life has been mentioned by Cassius Dio in the Revolt of Boudica. See an excerpt of her legend in Boudica Iron Age Warrior Queen by Richard Hingley and Christina Unwin.

A German legend, Faust is a well-known legendary scholar based on the life of Johann Georg Faust. Much like King Arthur, Faust has a few fantastical elements like alchemy and deals with the devil. The story of Faust has been written and created into plays. See an excerpt from Faust by Johann Wolfgang Von Goethe.

"I've studied now Philosophy
And Jurisprudence, Medicine,—
And even, alas! Theology,—
From end to end, with labor keen;
And here, poor fool! with all my lore
I stand, no wiser than before:"

While the legend of Lady Godiva isn’t a full-length novel like some other legends, she still goes down the history books. Why? For riding nude through Coventry, Warwickshire. While it's not completely clear if Lady Godiva was a real woman, her story is quite unique. Explore a snippet of The Tale of Lady Godiva.

"Lady Godiva and her husband, Leofric, were wealthy, powerful and charming. She was a philanthropist and spent her time helping local churches, and he was the Earl of Mercia and tended to the stately matters of the kingdom."

Beyond just the traditional legend, you can also find a specific legend called an urban legend. These popular legends are slightly different than traditional legends because they might be about something slightly fantastical that could actually exist. These stories are circulated as true even though they are fictional, like a story about a ghost that haunts the upstairs girl’s bathroom of your high school.

A popular example of an urban legend is bigfoot. There are bigfoot sightings and unexplained bigfoot prints. But hard evidence that this creature actually exists has yet to be found. A few other well-known urban legends include:

Legend vs. Myth vs. Folk Tale

When talking about a legend, it’s very easy to confuse it with a myth or a folktale. Why? Because these three types of stories do have some similarities. To help you keep them all straight, see how each of them differs.

The Stuff Legends Are Made Of

When you become a legend, it is a good thing. That’s true with stories too. While they excite and delight their readers, knowing there might be a bit of truth behind the hero makes them more interesting. Keep exploring types of literature by looking at examples of fairy tales. Then, explore what a tall tale is.