Economic theories can get confusing. This is especially true with theories such as Marxism that have evolved since they were created. Get an understanding of what Marxism is in simple terms and see how it differs from communism and socialism. 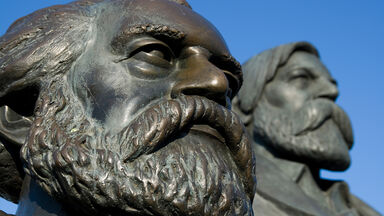 Marx and Engels' monument in Berlin

If you live in America, you know how it works under a capitalist system, meaning there are different socioeconomic classes. You may hear these classes called upper, middle, and lower class. However, you might also hear words like blue-collar worker, working poor, white-collar worker, etc. All these different terms define where someone stands on their society’s socioeconomic ladder. Some classes struggle, while others rule the corporate world.

To analyze and remove this struggle, Marxism came into play. To define Marxism in simple terms, it’s a political and economic theory where a society has no classes. Every person within the society works for a common good, and class struggle is theoretically gone. Sounds simple right? Not so much. Actually, many horror movies and dystopian books are written based on trying to create a classless, utopian society. Now that you know what Marxism is, explore where this theory came from.

Where Marxist Theory Came From

Facebook and Snapchat weren’t the first ideas to change a society. In fact, they were far from it. Ideas about changing a nation go back to Socrates and Aristotle. However, in the 1800s, you had Karl Marx and Friedrich Engels. Together, these two realized that many of people’s current struggles occurred due to the unfair treatment they received from those that held the power (owners and CEOs).

In an attempt to make the world a fairer and more perfect place, they drafted a manifesto called ‘The Communist Manifesto’. It was an attempt to explore the problems with capitalism and find a social and political theory to move beyond a capitalist society to one that benefits every member. The main points of Marxism include:

While the full theory of Marxism hasn’t made it to fruition in a government, there have been a few different government types based on Marxism including communism and socialism. Explore these three government theories.

Marxism vs. Communism vs. Socialism

Communism and socialism are both types of governments or theoretical governments born from Marxism. However, they vary in slightly different ways.

However, much like any theory, communism can be taken to the extreme and become its own form of oppression for workers which goes against the ideals that Marxism envisions. One example is North Korea. While they are a communist country, their own visions and ways of thinking have been added to the theory. Additionally, the government leader takes more of the role of a monarch.

Much like communism, socialism is a system of politics and economics with roots in Marxist ideals. In socialism, a central government owns all means of wealth, but individuals can still own property. Additionally, unlike the violent uprisings that can arise with communism, socialism typically occurs more organically through reforms and changes with an elected government. While a true socialist society doesn’t exist, a few close runner ups are Norway and Denmark. However, these governments still have capitalist sectors.

At its center, Marxism was a theory created by Marx and Engels to create a classless society where workers were appreciated and worked to benefit the common good. While the true theory has never reached fruition, a few governments have tried through communism and socialism.

Explore how the theories of Marxism are opposite to capitalism by looking at examples of capitalism. You can even check out different types of governments.