You may have heard the term neoliberalism floating around – and not in a positive way. But what does it mean economically and politically? Learn about neoliberalism, its main tenets, and a short history of how it came to be. 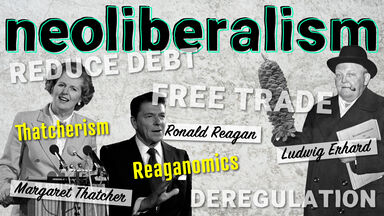 Although there are many interpretations of the term, neoliberalism is a political ideology that emphasizes the importance of the free market. Like laissez-faire economics, neoliberalism seeks to reduce the amount of government regulation in the economic sector. Proponents of neoliberalism believe that an unregulated free market has the greatest possible effect on the largest number of people.

Many assume that the liberal part of neoliberal means that the ideology is left-wing or progressive. In fact, neoliberalism relates to classical liberalism in economics, which believes competition is the main driver of the free market (i.e. Adam Smith’s “invisible hand.”) Liberal, in this case, means “unrestricted.”

Modern liberalism has a social-political aspect regarding the government’s responsibility to remove impediments to individual liberty. Neoliberals prefer the government to stay out of individuals’ lives. Both are based on classical liberalism but have diverged in meaning.

It’s tempting to lump neoliberalism with social progressivism or modern liberalism. While these ideologies have their roots in the same historical movements, they have diverged in modern usage. Keep reading for specific neoliberal tenets in the economic and political future of a society.

Neoliberalism mainly describes one’s desire for a free market that is largely untouched by the government. Words like deregulation and free trade are common in neoliberal arguments. Specific economic tenets include:

Some political tenets shared by neoliberals include:

Classical liberalism began in the 18th and 19th centuries with a strong utilitarian focus. Classical liberals believed that the free market economy was the most effective way to improve as many lives as possible. The Great Depression changed many perspectives on the value of unregulated markets, as liberals blamed laissez-faire economics for the downturn.

The split between liberals and neoliberals occurred in the 1930s as one movement (early modern liberals) emphasized more government spending and aid programs. Neoliberal reforms reacted against this movement in the 1970s and 80s with more focus on the free market, lower taxes, removing barriers to trade, and welfare reform.

Our modern interpretation of neoliberalism depends on the people who founded, advocated, and implemented its policies. There are many political and economic leaders from the 20th century who contributed to the rise of neoliberalism – for better or for worse. Some of these leaders include:

Neoliberalism is a nuanced economic perspective that ventures into political and social life, as well. It is one way to conduct an economy in a capitalist country. For more examples of capitalism around the world, take a look at an article that lists capitalist countries and different concepts of capitalism.