What Is a Protest? Understanding the Types & Reasons

A protest is a demonstration or rally to inform and influence the public about something happening in society. Learn about the types of protests along with a few famous examples. Take a look at why protests happen. 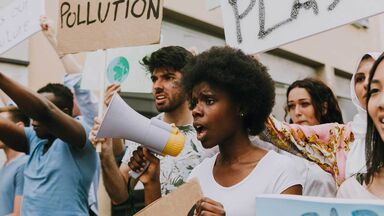 What Is a Protest?

A protest is a demonstration to influence public opinion, voice displeasure, draw attention to injustice, or share information about something happening around you. You might have a local protest of one person opposing an idea or action like protesting the lunch menu at your school. You might also see state and national protests by a mass public. Famous examples of national mass protests are the sit-ins and marches orchestrated by Black Lives Matter. A historical example of famous protests happened during the Civil Rights Movement. To truly understand what a protest is, it’s important to look at the different types of protests.

A sit-in protest is just that. It’s an act of civil disobedience where you sit in an area to protest a particular action. A famous example of a sit-in happened in Greensboro, North Carolina in 1960 when African Americans would sit in the white areas of a segregated lunch area and refuse to move when denied service and asked to move. Not only do sit-ins arouse publicity but they spark sympathizers as well.

A march or rally is a non-violent protest where a group of individuals gathers with signs, posters and more providing information about their cause. Marches might also have specific speakers to provide information on their cause. A few famous rallies that happened in 2020 included marches around towns and capitals protesting lockdowns during the COVID pandemic. A famous historical march included the March on Washington by Black Americans protesting Jim Crow laws.

While posters and banners can be used as part of sit-ins and marches, they can also be their own form of protest. A single individual might create a poster or banner objecting to an issue. For example, a family might place a poster in their yard objecting to mileages or taxes happening in their area. On a larger scale, an equal rights group might hand out posters or pamphlets highlighting injustices happening in the community.

In a hunger strike protest, protesters fast for a period to create pressure for a change of an issue. These can include inhumane conditions, political goals or to bring light to a problem. A famous historical hunger strike was staged by Mexican-American Cesar Chavez to bring support to farmworkers and labor.

Another form of political protest that might be taken by an individual or a group is the burning of a flag. Typically a criminal offense, the burning of the flag starts to venture into the realm of violent protests since something is being destroyed. A famous flag-burning protest happened in New Zealand when Paul Hopkins was arrested for burning the New Zealand flag in 2003.

Riots, looting and vandalism typically go hand in hand when it comes to violent protests. A riot is when a group of people lashes out against a community or government showing their displeasure or disapproval. In a riot, the property can be vandalized, stores might be looted and fires might be set. In 2021, a riot broke out in the U.S. Capitol Building when a mob stormed the Capitol during Congress’ counting of the Electoral College votes.

Another tactic that protestors use to gain attention in a violent manner is the use of bombs. This could be a large bombing of buildings or firebombs used during a riot. Bombs typically lead to injuries and deaths. A famous example of a bombing protest happened in 1970 at the University of Wisconsin-Madison. The bombing was committed by 4 anti-Vietnam War protesters and aimed at the Army Mathematics Research Center.

Why Do People Protest?

Many people might wonder why protests happen. However, there is a very good reason. Protests are typically the result of displeasure or injustice happening in the community or nation. Like-minded individuals typically gather to bring light to the subject and let the world know what is happening. Globally, protests have happened for a variety of reasons including workers’ rights and laws, civil rights, LGBTQ equality, racial justice, taxes, violence, and climate change. However, a protest can work to change even small injustices in your community. By bringing light to the subject, protestors hope to make a change.

Throughout history, protests have been used effectively and ineffectively to incite a change in a perceived injustice. Several protests have worked to make drastic changes in a government like the creation of the Civil Rights Acts in America. Want to learn more about protests and the civil rights movement? Explore how Martin Luther King’s vision changed the world.