What Is Rising Action? How Stories Build Suspense

Rising action is a literary term used to describe an important part of a story. Every type of story from a novel to a TV script uses rising action to keep audiences engaged. Discover how rising action builds suspense and hooks you into a story. 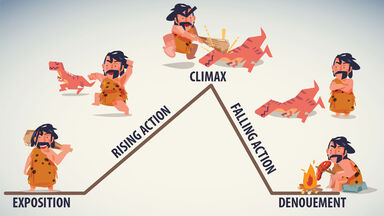 Definition of Rising Action in Literature

The basic definition of rising action is “what happens in a story leading up to the most exciting part of a story.”

In this sense, rising action comes after exposition, or the basic story introduction, and starts with an inciting incident. It includes a series of events that enhance conflict and ends at the climax of the story.

The rising action creates tension or suspense and lets the audience get to know the main characters better. You’ll see characters making difficult decisions, and you’ll see their flaws, which helps you relate to them. The rising action gets readers invested in the story.

In the mid-1800s, German novelist Gustav Freytag created a diagram for a story’s plot in the shape of a pyramid. His pyramid included seven elements, one of which was rising action. Freytag’s pyramid is still used today, often in modified forms.

Examples of Rising Action in Books

The majority of the plot in any great book or novel is considered the rising action. From picture books to literary classics, you can find examples of rising action everywhere in stories.

Harry Potter and the Sorcerer’s Stone

Harry Potter and the Sorcerer’s Stone is the first book in J.K. Rowling's acclaimed book series. In chapter four, the inciting incident occurs when Harry learns he’s a wizard and that he’s wanted at Hogwarts. Everything from chapter five through chapter 16 is the rising action leading up to the climax where Harry discovers that Professor Quirrel/Voldemort is the one trying to steal the Sorcerer’s stone.

My Side of the Mountain

In My Side of the Mountain by Jean Craighead George, the inciting incident happens when main character Sam decides to run away from home and live in the wilderness. Almost the entire book is the rising action as the climax comes near the end when Sam must choose whether to live alone in the wild or live with his family in more acceptable accommodations.

The inciting incident in The Giver by Lois Lowry comes several chapters in when Jonas learns he has been assigned Receiver of Memory. The rising action includes Jonas’s job training and ends with the climax where he and the Giver decide to change society together.

Rising action is all about raising the stakes for a main character and for readers. Now that you understand how to build the suspense with rising action, explore the other side with falling action.