What Is Sedition? Comparing It to Treason & Insurrection 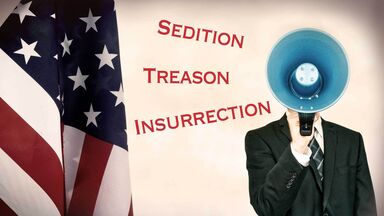 what is sedition shows man with megaphone
Advertisement

Sedition refers to conspiring with others to incite rebellion against lawful authority. Sedition, along with treason and insurrection, are addressed in the United States Code (115 U.SC. §§ 2381 – 2391). Under federal law, sedition occurs when two or more persons conspire to commit certain actions against the United States (U.S.) government. The conspiracy to commit such acts is sedition, whether or not the actions are actually attempted or carried out.

Sedition can take place in any U.S. state or territory, as well as any other location under the jurisdiction of the U.S. (such as a military base). The punishment for sedition can include up to twenty years in prison and/or a fine. The amount of the fine is not specified in the code.

The concept of treason can be broadly interpreted as treachery, but it has a specific definition in federal law. Treason occurs when anyone who owes allegiance to the United States of America, such as a citizen or resident, commits certain acts against the U.S. government. There is actually a treason clause in the U.S. Constitution; it is the only crime specifically referenced within the Constitution.

The punishment for treason varies widely. People who commit treason can be put to death, put in prison (for a minimum of five years) and/or fined (at least $10,000). Those found guilty of treason are disqualified from holding any public office in the U.S.

Under U.S. federal law, a person can be held responsible for being in any way associated with an insurrection or any kind of rebellion against the laws or authority of the U.S. government. Involvement may involve any of the following with regards to an insurrection or rebellion:

Anyone found guilty of insurrection can be put in prison for up to ten years and fined an unspecified amount. Such persons will also be prohibited from holding any public office in the U.S.

A person can commit any or all of these acts. Some actions are seditious and treasonous and may also involve insurrection.

The difference between these three terms can be broken down into simple explanations.

The penalties for sedition, treason and insurrection are not the full extent of penalties faced by those who commit such acts. For example, a person who engages in any of these acts could easily engage in slander or libel, mail fraud or other crimes. Those engaged in treason or sedition could find themselves facing charges of unlawful entry, wrongful imprisonment, weapons violations, and many other legal violations (depending on the specific actions taken).

Get to Know the Government

Now that you are aware of what sedition, treason and insurrection mean, take the time to learn more about how government actually works. Start by reviewing examples of different kinds of democracy. From there, you may want to learn about different types of governments around the world.